x0 is delighted to feature another new fantasy author this week. Would you like to enter yet another new world?  Consider that of “The Green Stone Tower”. 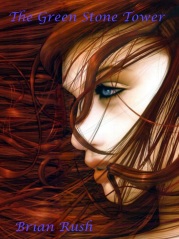 Long ago in the legendary time, at the very dawn of civilized days, the Old Gods sang the Green Stone Towers into being as bridges between two worlds. By means of the Towers the workers of magic, descended of the gods, escaped the wrath of the rest of mankind. Into the land of Faerie the mages fled, the gods followed, and the doors of the Towers were sealed behind them. In the ages after, the makers of magic evolved into the immortal faerie-folk. Now once in a while a faerie will brave the Green Stone Towers and visit the world they left behind, often for love’s sake, if a mortal takes their fancy.”

This is an epic fantasy, first volume in the series A Tale of Two Worlds. The story begins with Johnny Silverbell, the young son of a wealthy merchant in the city of Watercourse in the Kingdom of Grandlock. Johnny’s father means him for a fast-track to a noble title by way of a lieutenant’s commission in the Royal Army and service in the coming war. But Johnny has other ideas inspired by his secret, forbidden magical studies and the influence of a red-haired faerie girl he met and loved by the Green Stone Tower. His struggle to find the door into the Tower that will lead him to another world is only the beginning of the journey for him, little though he knows it.
Meanwhile, unknown to Johnny, his faerie girl lives under a doom of prophecy: to be the unwilling bride of the dark god Malatant, Lord of Shadow, and bring him victory in his ages-long struggle with the gods of light.
“The Green Stone Tower” is available here at Smashwords and here at Amazon.

Author Brian Rush says:  I was born in Texas but have lived on the West Coast since 1978. I’ve been writing fantasy fiction since I was 15 years old; it’s an obsession and a mental necessity — when I can’t write for any reason I become depressed. I also have a strong interest in spirituality and the occult, and am a Neopagan worshiping solo at this point but in the past involved with two different covens and a Druid grove.
Check out Brian’s blog at https://brianrushwriter.wordpress.com/