Join me in a sneak peak at another world. Callisto. Jupiter’s second largest moon. Rob Lopez writes that it is “Cold enough to suck the heat out of any pressure suit, and scoured by lethal levels of radiation every sixteen days as it orbits through Jupiter’s magnetotail. Nobody in their right mind would want to live there.”

But, in Rob’s newly created world in his latest book “Even the Dead Dance to Live”, people do live there. Read on for the rest of the book’s blurb, a little bit more about Rob, and a few questions Rob answered just for readers of this blog.

“Humanity built its first space city there. And for a while it looked like a good prospect. Mankind’s stepping stone to the stars. It’s all gone wrong though. Civilization is crumbling. And the cycle of life and death is whirling faster than was ever intended. Survival is a delicate balancing act that requires soft and careful steps.

Enter Shakespeare Cruz, a man on the run from his own dark past. He doesn’t do soft. And he’s anything but delicate. He’s got a price on his head, enemies on his tail and an ever tightening noose around his neck. He’s got a warlord who wants him to keep his appointment with death and a ghost who wants him to fulfill an impossible obligation. It’s not clear that either of them has picked the right man for the job. The time has come for him to make his choice however, and he’s got to make it fast. At stake is the soul of a city, the memory of a woman, and the life of one little girl. Only one thing is certain – it’s going to get ugly.”

About Rob Lopez:  Born in Leicester, UK, in 1966, Rob Lopez says  that he led a sheltered childhood, hermetically sealed inside his own head. He says ….. “I was vaguely aware of the 70’s – apparently a lot of stuff happened – but I was too busy reading war comics to no

tice….. When I left school my one qualification was daydreaming but I couldn’t seem to find a job for that. I saw an ad for a college course in electronics in a place that wasn’t Leicester. It was my first break away from home and I never looked back.”He adds that “College wasn’t a great place to learn ….[and] by then [I] had moved onto fantasy and science fiction, and, for some reason, it occurred to me that I might want to be a writer. Within seven months I was unemployed, homeless and in deep shit. I washed up in a seaside town for the winter, nursing a bleak depression and surviving on biscuits. But I carried on, walking every day to the library to work in the warm on my first novel. When spring came I gathered my saved dole money and got out of town, heading south with the aim of getting as far as I could before the money ran out. As it turned out that only took four days. The year was 1989 and the eighties were about to end, though I’d been too busy to really notice much about them. Apparently a lot of stuff happened.”He met his wife, had a daughter, finished his first novel, decided it was trash, and “decided  it was time to grow up and get a real job so I became a youth worker, then a mechanic, then a community worker, then a teaching assistant. By the time I got a job as a shop assistant the nineties were coming to an end and another empty era was nearly over. I mean, did anything happen in the nineties? I don’t know.”

“I got to work on my second novel. Then my third novel, then my fourth. Were they any good? No, but learning the hard way was a family motto by now and I gradually picked up the art of wrestling my dreams into paragraphs and tacking them together into a coherent form. My fifth novel, Even the dead dance to live, is the result, brought to you by the technology of the web and available on Kindle at Amazon here.

Rob answers a few questions just for this blog:
Your book has an attention grabbing name. Are you willing to share with those of us who haven’t read it yet where the name came from?
It’s a fairly urban novel, set as it is in a colony city, and dancing, jiving or ‘ducking and diving’ are common street terms for simply getting by in the face of things you can’t control, so I used that as a motif. I did a lot of research into conflict zones around the world, like Mogadishu, Beirut and Baghdad, and you just find these people who, no matter how bad things get, still have to get on with life. I tried to capture some of that in the novel, with different characters reacting in different ways to their environment, but all essentially seeking to do the same thing: survive. As for the part the dead play in all this, that’s a bit of sub-plot and back-story that will only make sense in the last line of the book.What’s the next project?  Will there be a more action on Callisto?
Yes, most definitely. Even as I type, there are several characters from the first novel struggling through the chaos and the anarchy, their lives on the line and with time running out. As it undoubtedly always is . When I completed the first novel I thought I had finished with Callisto, but Callisto clearly hadn’t finished with me, and there turned out to be more to tell. The next novel will probably be titled, There Are No Angels In Heaven, and it’s looking like a late 2013 completion date. But a lot can still happen, so don’t hold me to that.I read your author page at http://www.amazon.com/Rob-Lopez/e/B007SA1LIK and had to laugh. It is true that people hardly ever read these things.  You say that you aspire to write “kick-ass action with interesting characters and a little more depth”. This sounds like a very good plan.  So which of these did you think “Even The Dead Dance To Live”  achieves most effectively?  Or is there something else entirely about the book that you like better?
Oh. My. God. Someone read that! Do you ever have that moment when, after making a glib, throw-away comment, someone decides to hold you to it? No, me neither. Because I thought about every word of that statement carefully… well, sort of. But actually, it’s not so much a plan as a description of what I think  Even The Dead is. It’s certainly kick-ass. Quite violent in fact, so perhaps not for the faint hearted. The characters are certainly something I work hard on. They own the story. Science fiction is frequently accused of producing wafer-thin characters that are just cyphers for some nerdy concept, and I really, really wanted to avoid that. If it’s not really about the characters, their dilemmas, traumas, decisions, then I’m just not interested. Getting the characters right is what keeps me up at night. As for the little more depth – well, it’s not a Literary novel, but I did want more than just a series of actions. As reviewers have noted, it’s not a black and white, good guys versus bad guys book. I wanted some complexity in the character motivations, but also in the settings that they have to wade through. I don’t like the simplistic political backdrops that, again, are too frequent in sci-fi. Life’s never that simple, and I wanted to express a little of that. Not too much, as I’ve got to think about the pace. But enough to make the place feel lived in and real. As for aspiration – yes, I aim to write more like that, and to get even better at it. But that too is the kind of thing that keeps me up at night. C’est la vie.
Check out Rob’s blog here.

It’s another give-away day on kindle. Grab y1 for free.

Recently I’ve gotten some feedback on my book from folks who did not particularly enjoy it.  That’s part of the process of writing, of course, and I accept these comments with all the good cheer I can manage.  After all, we all enjoy different things and I appreciate an honest review. But I’ve heard a few times now that writing about Nigeria was part of the problem. It has been suggested to me that it just isn’t a place that particularly interests many readers from the United States. So I’ve had to consider, after the fact, why in the world I picked such a “difficult” location for my first book. I mean, wouldn’t Paris or London have been better?

Much of x0 probably takes place in Nigeria simply because I began to write a tale of two very different women helping each other about the same time that I started a new job exploring for oil in the Niger Delta. Mind you, I do my exploring at a computer in Houston, twisting and turning 3-D images on a screen just like Lola does in the story. The fair-sized oil company that I work for bears little resemblance to Lola’s tiny focused employer, and as I began writing I promised myself that I would steadfastly resist the temptation to let any thing about my actual place of employment creep into the fictional world I was creating. Certainly I owed my employer that discretion.

In the end though, I made one exception. One day I asked my office mate, a Nigerian geologist, to describe to me how his tribe, the Igbo, were unique. He responded by telling me a legend about Igbo slaves coming to America. It startled me at first that he would even speak of such a thing, but in the end I was touched by both the moving story he told, and by the powerful way in that he told it.  I tried to capture each of those when I retold this scene in my book. 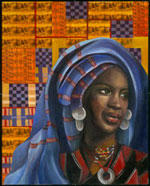 Nigeria, it turns out, has a plethora of rich stories to tell, and as an outsider I am poorly equipped to speak of even the few that I know. Yet as I kept writing I filled myself with all the history, culture and geography I could find on the internet. Somewhere along the way I became a fan of Nana Asma’u, a proponent of education for her fellow Muslim women and a poet and scholar herself.  She lived in northern Nigeria in the early 1800’s.

Why Nigeria?  Why anywhere. Every spot on this earth is teeming with tales of heroes and feats that will never make it to our ears. Why listen to these tales? Why tell them again? When young Pakistani Malala Yousufzai was shot by the Taliban a few weeks ago for advocating education for girls, I thought of Malala’s noble predecessor of 200 years ago, and I had a perspective that I would once have totally lacked.

Why Nigeria?  Because when I started writing this book, there probably wasn’t a place on earth that I knew less about. That’s not true anymore. I get that the fascinating details of a far off land don’t appeal to everyone, but they do to me. I had to look hard to find a location for my second book that was even less known to me. I found it. And I hope that some of you will also enjoy reading about the remote Pacific Island nation of Kiribati.