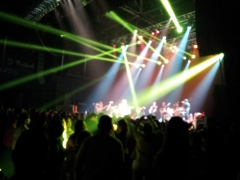 At a concert a few nights ago, it struck me that making music is so much more collaborative than writing fiction. Actually, you could argue that almost any human activity is more interactive, except maybe art. So it isn’t surprising that while authors produce novels and plays hoping to encourage world peace, and artists paint and sculpt and sketch to do the same, music rules as a powerful medium for getting across a message of peace (or anything else) because it is something that people make together and appreciate together.

Don’t believe me? Check out this list of hundreds of peace songs at everybody’s friend Wikipedia.

I couldn’t help notice that this list dates me a little a bit, and so I plan to check out every song on the Wikipedia list written after 2000 and report back with a top ten list that is at least half from this millennium. Meanwhile, check out another groups list of top ten peace songs here that spans genres and decades. I’m also very happy to “take nominations from the floor” for the best peace song ever. Got a favorite to nominate?

3 thoughts on “Singing for World Peace”