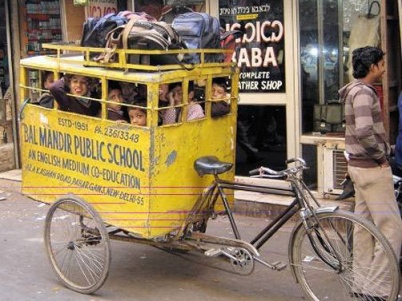 I’m giving some thought today to negative stereotypes associated with India, particularly those held by my fellow citizens of the USA. There are plenty, let’s face it. We paint a comic insult cartoon of every other nation on earth, although some caricatures, like the stuffy Brit, do imply a bit of fondness. I wonder if every other culture does the same. I think I am going to go with yes on this one, and guess that all caricatures of us are not that fond either.

Several years ago a good friend of mine was told his job was being outsourced to India.  The friend is an electrical engineer who spent years writing in machine code to tell your car’s more intelligent parts exactly how to behave. It was a high level skill and he was very good at it, but he was told that his company had a found a kid in India who would do the job at a fraction of the cost and, as his last assignment, my friend was to train his replacement. Yeah right. Guess I’m just not going to remember a whole lot to teach him, my friend laughed. I sympathized.

And then, he started to talk to the young man, who turned out to be smart, eager and happy beyond belief to have gotten this job.  It was going to make him one of the richest people in his village.  One of the most successful members of his family ever. He and everyone he knew were rejoicing at this incredible good fortune. So of course my friend started to remember more and more to teach him, and before he was done he had passed along every trick and shortcut he knew. The young man was so grateful and once he took over my friends job I’m told that he was very good at it.

So was my friend successful, or not? That depends on how you define success. Remember board games?  The directions always started out with “The object of the game is……” Surely I’m not the only person who has wished that real life came with such clear information. If the object of your game is to make as much money as you can, as easily as you can, then my friend failed.  And, let me add that if such is your object, you should consider something other than writing self-published novels. They are exhausting to write, they take forever, and you can probably count on a few dollars a month in return.

But what if success is having a more interesting life? Learning things you never knew you never knew? I firmly believe that the internet has brought the world together in ways we are just beginning to understand, and it has done this for anyone who gets online. But writing and self-publishing three novels has taken this to a whole new level for me. I now share ideas and information with readers and fellow writers in a global community that would have astounded my seventh grade self, a girl who could barely contain her excitement at being allowed to study world geography. Today, copies of my three books exist in over twenty countries. I’m pleased beyond belief.

And later this week, I’m going to be interviewed on a blog written by two young women in India. I’ve done a fair amount of such interviews already, but this one is different because I didn’t go to them. They found my book, read my book, liked my book, and sought me out. All the way from India. Is that cool or what?

The young woman I’ve been corresponding with works as an instrumentation engineer and she also has aspirations to write. She wondered how I manage to raise a family, have a technical career and find time to be an author. I told her that I didn’t manage all at once, rather the writing started once the kids were older and job demands lessened. I offered advice on any of the above if I could ever be of help. I suspect that she has plenty she could teach me as well.

Did I mention that my my friend the electrical engineer learned quite a bit from the young Indian man he instructed? Well he did, of course, for in the best of circumstances knowledge flows two ways. Not every outsourcing story ends so well, but in my friend’s case his employer was so impressed with the job that he did training this kid, and with the new skills he picked up while doing so, that they decided to keep him on also. He trained a few others for them and then he went back to happily writing machine code, using all he had learned to his advantage. Your car may run better because of his story.

So what’s the object of the game? Some days I think I know, other days I’m not so sure. But I am am pretty certain that my friend’s story is a success story, in more ways than one. And I do know that I gained far more than I hoped for when I picked up my laptop and started to write my first novel. If gaining more than you hope for isn’t success, what is?