Funny how forty-seven years can melt away in an instant.

Sixty-year old Sherrie Cronin is going through the last bits of china and art from her mother’s house. She is used to the memories that the old things bring, and the pang of how her mother once loved this vase or her father once showed her that book. What she isn’t prepared for is the newspaper. Still stark in its faded shades of charcoal and cream, it is a relic of communication that she almost never sees these days. The Wichita Eagle. It whispers to her from a place she once lived, and from a Friday August 23 of long ago. 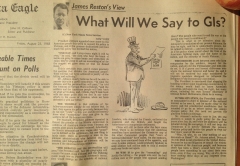 “I wonder what was going on in 1968?” she asks, as she picks up what turns out to be the editorial page.

“President Johnson appealed once more to the American people this week to support his policy in Vietnam ….” she reads, and forty-seven years melt away in an instant as thirteen-year-old Sherri Roth stands holding the newspaper. The girl is curious, she yearns to be a Lois Lane-style journalist, and she skims the news, searching for answers to the burning questions about life that keep her awake at night as she tries to understand the universe.

“One day….” Johnson is quoted as saying “the men who bear the brunt of this battle are going to come home and .. they are going to ask an accounting of us …. and the soldiers and the American people will look back on what we’ve done … with the same pride that we feel in our other efforts in the cause of freedom when we have defended it with out blood.” Johnson was speaking to the VWF, so it doesn’t surprise the astute young Sherri that his assertion is met with enthusiastic applause.

But this is the editorial page. The writer of the article has his own perspective to add. The editorialists says “The trouble is that millions of [Johnson’s] fellow countrymen simply do not believe that. In fact they oppose his policy precisely because they do not feel ‘pride’ in this war and do not honestly know what ‘accounting’ they can give to the soldiers for all the human sacrifices…. There is no evidence that the American sacrifices have convinced the Chinese or any other communist peoples that ‘wars of national liberation’ have failed. On the contrary we might have convinced them of the opposite and even Lyndon Johnson would probably hesitate to send another half million men to Asia if another such war broke out again.”

Yes. Of course. The older Sherrie knows that history will eventually say “What a mistake. What were we thinking?” She knows that it will be decades before any leader sends another half million men to Asia to meddle into the internal affairs of another nation. But she also knows that it will happen again.

Young Sherri is a budding peacenik, holding secret views about pacifism that would disturb her parents if only they knew of them. Over next few years she will silently support Eugene McCarthy, and learn to despise Nixon. She will hold her breath during the Iran hostage crisis, and watch the invasion of Kuwait while she nurses her youngest child, crying in relief when the brief war ends without further escalation. She will shudder at the bombing of Serbia, thankful no troops are on the ground. She will applaud George Bush when he shows restraint after the attacks of nine eleven and she will utter outraged opposition when he inexplicably invades Iraq. She will even become a fan of the Dixie Chicks when they oppose the war, and buy her first Country Western album.

Forty-seven years is a long time, the older woman thinks. The pain and loss of Vietnam is all but forgotten now, save for the families that were the hardest hit. How would you expect people to remember the discord here, and the devastation there, in far-away beautiful places filled with young girls every bit as eager for life as she was? Who now thinks of the cost of that war, the waste, the shattered bodies and brains, the hatred and fear generated and, in the end, the shame of nothing to show for sacrifices so horrible? It is a thing of history now. Done and gone. She carefully folds the newspaper back up, putting the memories of wars past away along with the small piece of china that the newspaper once held.

For more notes from 47 years ago, where 13 year old Sherri Roth reports the news from the Friday August 23, 1968 Wichita Eagle, see my other blogs posts for the How to Get a Standing Ovation Edition, the Women’s Edition, the Won’t You Please Come to Chicago Edition and the Race Relations Edition.

[From page 4A of the Friday August 23, 1968 Wichita Eagle “James Reston’s view” from the New York Times News Service]