I will soon be publishing a book of essays on world peace, and I am seeking YOUR thoughts on the subject. If you would like to contribute an short essay (approximately one to five thousand words) please contact my character Lola.Zeitman at her gmail account or ask me for more info here. Any thoughts expressed with an open heart and good intentions will receive serious consideration for inclusion. Pieces with unique perspectives or unusual ideas are most likely to be used. 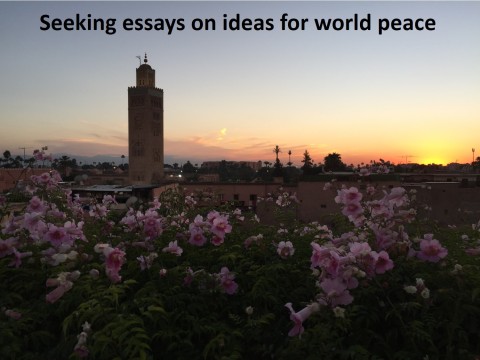 The book will be published electronically in about 4 weeks on Amazon and Smashwords. It will be sold for ninety-nine cents but there will be several promotional giveaways, so no significant profits are anticipated. Half of any proceeds that are received will go to the humanitarian organization “Doctor’s Without Borders.” 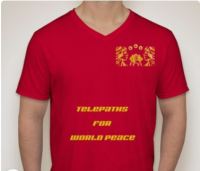 All essayists will retain the full rights to their own work but must grant me permission to use their words in this publication. Writers of all pieces that are accepted for inclusion will receive full credit for their work in the book, as well as a “Telepaths for World Peace” t-shirt in a size of their choosing, and the chance to use their essay as the cornerstone for a guest post on this blog. I hope to hear from many of you. If the world ever needed our ideas on this subject, it is now.

The Airbnb site says my hosts at the Riad speak English, French and Spanish along with the local Arabic, but it only takes a few minutes for me to realize that the claim regarding English has been exaggerated. Lahcen, the helpful house manager who greets me, probably does know several hundred words of English, compared to my several dozen words of French and two of Arabic, but his ability to answer my questions is limited. Najet, the cook and custodian who assists him, speaks some French and no English at all. Soon the three of us are communicating with gestures, key phrases and facial expressions, and it’s not going as poorly as you might think. 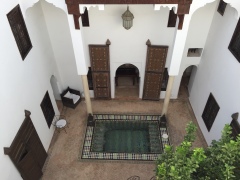 Still jet lagged, I get a slow start the next morning and Najet is anxious to begin cleaning my room. I am sitting in the public area getting organized for my day when she gestures to her cleaning equipment and my quarters and gives me a questioning look. I nod my consent. She pauses.

“No douche?” she asks clearly and politely. I’m sure that my eyes widen before I remember that douche is the French word for shower. “No douche aujourd’hui,” I declare, thinking that sometimes even a few words in a common language can make all the difference in the world.

When I return that evening, there are lots of things that I want to ask Lahcen. Is Najet his wife? A relative? Is he from Marrakesh? Is this his full-time job? What does he think of tourists, of Americans? But every time I start talking he nods and smiles and looks confused, which is exactly what I do when I can’t understand someone. 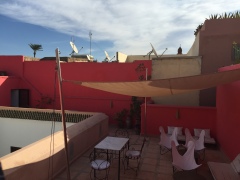 The next day he volunteers some information. “I love Hollywood,” he tells me. “I love your movies, but I watch them in French.” He shrugs, a little embarrassed. “In English I can’t tell what they say.” And I get that I’m like one of those movies to him. He thinks that he ought to understand me but I talk fast and use idioms and shortcuts and make no sense to him at all.

“I wish my French was half as good as your English,” I reply and I mean it.  I think he understands me for once because he gives me a genuine smile back.

“I think that all of your country should learn Arabic. In school,” he adds. I’m sure my eyes widen at the idea. “And we should all learn English here. In school.” He looks at me hard for signs of comprehension. “If we could understand each other, then we would get along.” 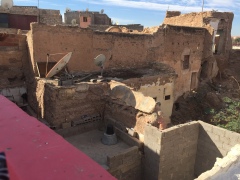 I get where he is going with this and I have to admit that I like it a lot. I appears that my gracious host is a kindred spirit of mine, someone hoping to bridge the gap between cultures, filling it with empathy and a compassion born of recognizing our common humanity. I lack the vocabulary and the inclination to argue with him about the practicality of his plan, so I just say “I hope it happens.”

When I settle my bill, ready to move on to my next destination, I leave him and Najet a generous tip. He takes my luggage to the cab and speaks to the man in rapid Arabic. I realize that he is using part of my tip to pay my cab fare, which I also notice is a only small fraction of what the cab drivers have been charging me. I appreciate his gesture.

I remember my last encounter with people with whom I could not speak. A few months ago a couple in Portugal named Alberto and Maria helped my husband and I rescue our rental car when it became stuck on a dirt road. A few days later, when I discovered it was “International Day of Peace,” I wrote a post about them, and about how the wordless experience was so intense that Maria and I hugged each other afterwards with tears in our eyes. 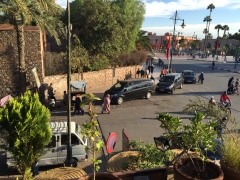 I have enough cultural sensitivity to realize that a hug would be inappropriate with Lahcen, especially in such a public place. But I am equally grateful to him and Najet and I wish them both joy and peace, even if I do not know how to tell him so. I can only nod my thanks to him as we part, two souls seeking the same harmony in a fragmented world.

(For more about my trip to Morocco see  That’s Why you Make the Trip, I see ghosts , It’s an angry world in some places and My Way on my other blogs.)