Every once in awhile you come across a fact and think that can’t be right. And then you find out it is. That’s what happened to me when I received a plea to ask my members of congress to discuss restricting the first use of nuclear weapons. 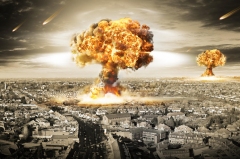 My first response was Oh, you mean if someone lobs a nuke at us, we tie the hands of the president so that she or he can’t strike back? Do we really want to do that?

No, I was told, the bill has nothing to do with responding to a nuclear attack. It only concerns being the one to first launch the nukes.

Queue the response: that can’t be right. So I have to ask. Did you think that the president could launch a nuclear weapon for any reason right now? With no declaration of war? All by himself? Well, it turns out that he or she can.

I admit that the next thing I did was guess that this bill had been introduced because of the rash immaturity frequently shown by the man now occupying the white house. And I admit that part made sense to me. But it turns out I was wrong about that as well.

The bill was originally introduced in 2016 during the Obama administration, with the encouragement of the Union of Concerned Scientists. This group believes that we need to have a robust congressional discussion about the wisdom of giving any president, no matter how cautious or how brash, the unilateral power to initiate a civilization-ending event. I think they have a good point.

Our current situation increases the probability of nuclear war in a real and dangerous way. It makes perfect sense to me that we should insist that Congress take these dangers seriously and that we should work to change a system that puts all of our lives at risk.

Right now both measures (known as Senate Bill 200 and House Resolution 669) are sitting in committees (Foreign Relations and Foreign Affairs) while congress spends its time handling what they believe to be more pressing matters. (Don’t get me started on that.)

If you haven’t developed the habit of contacting congress yet, it is an easy and worthwhile activity. Find out who you should be contacting at whoismyrepresentative.com. Then search for them by name, go to their website, and hit contact. The easiest thing to do is to fill out their little form with your information, and then type in something simple like “Please lend your support to bringing House Resolution 669 on restricting the first use of nuclear weapons to the house floor for a vote.” A poorly paid intern will note the subject matter of your email and will tally up your opinion on it.

It’s a little bit like littering. If just you do it, it really doesn’t make much of a difference. But if five percent of the population does it, everyone is going to notice.

One thought on “No one person should have first strike capability”