Today it is my pleasure to welcome author Chloe Helton and her novel The Red Pearl.

Author’s description of the book:

“The Red Pearl is a delight. Meticulously researched, it transports the reader to the inns and backstreets of Boston in 1778. Lucy Finch’s personal tragedy spurs her on to take an active role in the revolutionary war, despite the immense danger it brings to herself, her family and friends. Ms. Helton’s characters are warm, living beings with gifts and flaws. Their relationships are altered — broken or strengthened — by the battles on distant fields and the evil of individuals closer to home.” – Carrie Bedford, Author of Nobilissima 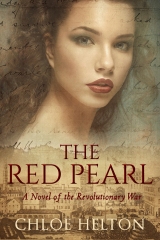 There’s something peculiar about the small group of men who have begun to frequent The Red Pearl, the tavern that has hosted a variety of Boston’s men since before the Revolutionary War began. In a rebellious city that does not tolerate Loyalists, men could come here and speak freely without fear of the repercussions — and Jasper Finch, the tavern-keeper, has always been proud of that.

But now the war is in full force, and Lucy Finch — the tavern-keeper’s wife — is growing nervous about The Red Pearl’s most loyal customers. Their clandestine meetings and hushed whispers suggest dark secrets — secrets which may threaten the safety of Boston, and the future of the war itself.

Lucy struggles to stay loyal to her husband’s wishes while grappling with the surprising truths of America’s war for independence. When a terrible assault makes her ache for revenge, she must make a choice: Will she keep quiet about the explosive secrets she has learned, or will she expose them and risk her marriage and possibly her life?

Set in the wild and unpredictable world of the Revolutionary War, fans of historical fiction will fall in love with Lucy Finch, who faces impossible choices that may change the fate of a nation.

Chloe Helton is the author of four historical fiction novels, including And the Stars Wept and the Wattpad favorite A Thousand Eyes. Her readers have journeyed with her from the shores of Elizabethan England to the stormy battlefields of the Civil War in search of the often-hidden stories of women who made history.

Purchase her book here at the Amazon link for The Red Pearl.

Yes there is a giveaway:

“I came to tell you something to pass to your captain.”

“Information. Men talk, especially when they’re drinking in the tavern, and I’ve heard things that might be of interest.”

“Tavern gossip is not our concern, Lucy. It was good to see you.”

My lips pursed. Jonathan had never been the most friendly of us, but this was rude. “No. I paid fifteen pennies and took a whole day to come here, which my husband would have my hide for if he knew of, by the way, and I won’t let you pass me off. As your sister, I deserve to be listened to, at least.”

He looked away, then sighed. “I regret my rudeness. You may speak.”

Tempted to clench my jaw – you may speak, how patronizing of him – I launched into the story immediately, my enthusiasm spiraling with every word, and when I finished I glanced at him proudly, anticipating his astonished and impressed smile.

His fingers twitched. “Thank you,” he said flatly. “I’m sure it will be taken care of.”

That didn’t sound right. “You’re not going to do anything about it?”

There were a few other soldiers on the other side of the empty pit, and they perked up for a moment at my urgent tone.

“We get dozens of tips like this,” my brother informed me quietly. “The colonists never have a problem foiling British shipments.”

“You don’t understand. They’ve gotten away with it so far; they said they’ve never had a ship that didn’t pass through.”

He considered this. “Okay.” It wasn’t a rejection, but it wasn’t a promise, either. It was less than he would have given Thea, who had married a good patriot, whose first love had not been so wild as to scare our father into marrying her to someone so absurdly sensible as my husband.

“I promise you, I am speaking truth,” I told him. “I wouldn’t bring this to you if I didn’t believe it.”

This post is part of a tour sponsored by Goddess Fish.

Check out all the other tour stops. If you drop by each of these and comment, you will greatly increase your chances of winning.

A Personal Note from Me:

I knew I wanted to feature this book as soon as I read the description. I love stories of strong women who affect history! My own blurb for One of One also contains the phrase “the fate of a nation.” It’s a great phrase; it never fails to give me the shivers.

Although I didn’t get a chance to read this fascinating novel in time to review it along with this post, it sits high on my to-be-read list.

Today it is my pleasure to welcome author Audrey J. Cole and her novel Viable Hostage.

Author’s description of the book:

Malorie’s best friend is missing, but no one seems concerned about the wayward medical student’s mysterious disappearance—until another student’s partial remains wash ashore a Seattle beach…

When Malorie witnesses her best friend and roommate leave a campus bar with a mystery date driving a silver Mercedes, she suspects foul play, especially when Lani fails to return home the next day. Both women, med students in their final year at Elliott Bay University, have a lot riding on the line, but due to Lani’s wild past, no one in her family is worried. When Malorie’s fears for her roommate deepen, she turns to her Uncle Wade, a Sergeant at Seattle Homicide.

Within 48 hours after Lani goes missing, the partial remains of a brutally murdered young woman wash up on Alki Beach, and a human hand is found in a crab pot off Bainbridge Island. When one of the bodies is identified as a pregnant, fourth-year medical student, Wade believes there’s a connection with Lani’s disappearance. And, that they might be looking for a serial killer.

Malorie suspects Lani’s kidnapper is someone they know, possibly even one of their professors at the university, a prominent Seattle anesthesiologist whose wife is the president of EBU. But when Detective Blake Stephenson discovers evidence that links another suspect to the professor’s Mercedes, he and Wade must act fast to attempt a wild rescue in the middle of Puget Sound. 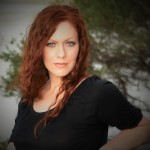 Audrey J. Cole is a registered nurse and a USA Today bestselling author of thrillers set in Seattle. Audrey lives in the Pacific Northwest with her husband and two children. Find her at:

This is a tidy, fast-paced medical crime novel sure to please fans of this genre.

What I liked best:

What I struggled with:

I do, however, recommend this novel to anyone who enjoys stories that live at the intersection of solving crimes and of performing medical research. I think this is a tough place to write with both accuracy and suspense, and Ms. Cole is to be commended for doing both.

Yes there is a giveaway:

This post is part of a tour sponsored by Goddess Fish.

Check out all the other tour stops. If you drop by each of these and comment, you will greatly increase your chances of winning.

There was something evil in the way he had looked at her. He was dangerous. Psychotic. Malorie could see it in his eyes. Those cold, dark eyes. He was chasing her.

Malorie ran faster, with so much adrenaline she didn’t feel the ache in her legs or the burn in her lungs as she gasped for air. She could feel him getting closer. Hear the sound of his boots scrape against the pavement behind her. He’s going to kill me.

She felt him close in behind her. A sharp pain ripped through her arm as he grabbed her and drew her close to him with tremendous strength. Malorie opened her mouth to scream as she was awakened by the sound of her alarm.

She wasn’t being chased. She was in Lani’s room. She sat up in her roommate’s bed, sweating through her t-shirt and breathing hard.

She silenced her alarm, flooded simultaneously with relief that it was just a dream and the familiar dread that her best friend was missing and possibly never coming back.

Why did I pick this book to review? Well, my own book One of One is about a young woman who is taken hostage and rescued by women who care about her. I’m always looking for kindred spirits, writing-wise, and this seemed to be about something similar. Cool, I thought.

Even though the book didn’t quite turn out to be about what I thought, I do think it is good to get out of your comfort zone and read different types of things.

Also, I received a free electronic copy of this book, which would never be enough to make me write a better review for anyone.