Today it is my pleasure to welcome author Sydney Jamesson and her mystery/suspense novels Duty of Care and The Caretakers.

On her death bed Emily Derbyshire’s mother made her promise to take good care of her little sister. Keeping her promise, twelve-year-old Emily did exactly that and became five-year-old Rita’s benefactor and bodyguard. 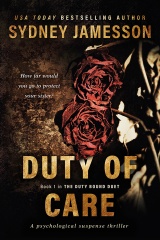 After eighteen years of sisterly devotion Emily receives some shocking news! Rita has committed suicide. When disturbing details start to surface, Emily puts her highflying career on hold to seek out those responsible. She hires an American private investigator Robert Blackmoor; a motorbike riding, no-frills, computer hacker who will use any means necessary to unearth the truth.

Not surprisingly, Robert uncovers secrets from Emily’s troubled childhood and chips away at the glossy veneer of deceit which masks the truth behind, not only Rita’s life, but Emily’s imperfect life too.

Together they assemble the pieces of a sinister puzzle, revealing a cruel and corrupt world of exploitation and murder: a Dark Web into which Rita has become entangled.

As dark forces encircling Emily tighten their grip, and with everything to lose, she must make a life and death decision that she may live to regret.

Emily Parsons is a product of a difficult childhood: self-reliant, fiercely protective and willing to do whatever it takes to safeguard the wellbeing of those in her care. She has even slayed a monster, or two … or three in the name of poetic justice, and yet she is haunted by the image of a beautiful blond girl.

Sixteen-year-old Louise Travis has been abducted. 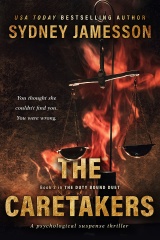 Louise’ fate rested in Emily’s hands, but she let her slip through her fingers like gold dust, only to be swept away by a malevolent band of brothers.

By once again enlisting the help of computer hacker, Robert Blackmoor, Emily must find Louise before she is lost forever in a Dark Web of heinous crimes, cruelty and corruption. The clock is ticking, and Emily’s investigation is drawing the wrong kind of attention, but she will not back down. She is duty bound to protect those she loves.

With skeletons from her past being unearthed, who can she turn to, and who can she trust with her own sinister secrets?

In this guest post, author Sydney Jamesson takes a tongue in cheek approach to writing psychological suspense and advises us “Don’t try this at home!”

Reading a psychological suspense novel is a bit like watching someone throw a firework onto a camp fire; at some point you know that sparks will fly but you can’t predict the size or the force with which they might strike you down.

All you can do is watch and wait!

Even though you might be tempted, at no point should you provide too much information too soon for your reader. Finding out what kinds of firework you have thrown into the fire is half the fun; giving too much away too soon will only ruin the experience of finding out for themselves.

It also follows that you shouldn’t foreshadow the explosion with suggestions of safety wear: a flack jacket, a visor … In doing to you’ll spoil their anticipation and have them running for cover before the touch paper catches alight.

What you should do, is provide your reader with distractions, throw in a red herring or two, clues as to the timing of the big bang, prepare them for the moment of revelation but be subtle, allow the firework to hiss and sizzle without actually blowing up in their face.

As for the psychological aspect of the story, you can expect the reader to ask, where did the fireworks come from, who threw them into the fire and what was their motivation for doing such a dangerous thing? And you need to have some really impressive answers slotted into your backstory or the plot just won’t ignite the imagination of the reader.

You can always fan the flames with an unhealthy dousing of obsession.  Psychological thrillers often contain powerful emotions like dread and fear, or elements of horror like trauma and shock. As the flames in begin to leap and dance before the reader’s eyes they will start to see the story taking shape, sparks will fly and spread like wildfire in their imagination…

Only when the heat is rising should you allow the firework to explode, to shower your reader with glowing pieces of a puzzle they hadn’t quite figured out.

As with any firework display you hope your reader will applaud and leave the smouldering mass that remains smiling with satisfaction—they should leave knowing they have been entertained!

A word of warning: playing with fireworks can be dangerous. Make sure you know what you’re handling and that your reader stands well back. You don’t want them to get their fingers burned … how then would they write a review? 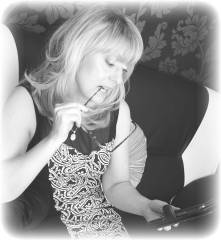 Sydney Jamesson is a USA Today bestselling author by night and an English teacher by day. She is nocturnal by nature and loves nothing more than staying up late, listening to music and being inspired to write. She has always written creatively; in her home is one enormous wastepaper basket full of discarded phrases, opening lines and pieces of dialogue that have hit her like lightning in the middle of the night. Her USA Today bestselling trilogy, THE STORY OF US sold worldwide, and she has been thrilled to continue Ayden Stone’s and Beth Parker’s epic love story in The Story of Us Series: Into the Blue, featuring Blue Genes, Blue Hearts and Blue Moon.

More recently, Sydney has focused on psychological suspense. THE DARKEST CORNERS was her first venture into the new genre: a complex love story filled with lots of angst, emotional scenes and edge of your seat suspense as a single father and a troubled young woman confront their deepest, darkest fears together. The twists come think and fast and the ending is unforgettable!

In her latest novels, DUTY OF CARE and THE CARETAKERS – THE DUTY BOUND DUET -readers explore the seedier side of the Dark Web; witness abduction, human trafficking, and a devoted sister’s willingness to do whatever it takes to safeguard the wellbeing of those in her care. It’s a real page turner, filled with incidents which are heart-breaking and heart-stopping in equal measure!

MAY CAME WITH A vengeance. Mid-month, there was an outbreak of whooping cough.

Like a wrathful ogre wielding a scythe, it struck down the young, the frail and faint-hearted. Aged five, Rita Derbyshire was incapable of escaping its relentless assault. Emily was quick to read the signs: a lack of appetite, flushed cheeks and a wracking cough that had her gasping for breath.

Despite the outbreak, an ineffectual night shift worker was reluctant to respond. He locked the office when Emily asked to use the phone to call for an ambulance and staggered to bed stinking of whisky and tobacco, claiming it was too late to drive anyone to the hospital.

Fearing Rita might die, Emily raised hell, had the O’Farrell twins rouse anyone who was not struck down with the illness to dress warmly, to put on gloves and meet her in the kitchen. When they were assembled, bleary eyed and shivering, she explained that if they did not work as a team that night, then some of them would die.

Remembering what she had read on the computer at school about the illness, she paired them up and handed one of them a bowl of steaming water. Their partner was to guide them slowly to one of the ailing girls. They were to hold the whooping girl over the bowl under a towel and encourage her to inhale the steam. Once the water had stopped steaming, then they had to do it all again. Having organised them, she returned to Rita and did the same for her. The caravan of bowl carriers continued through the night.

When the day shift worker, Cassie Hendricks, arrived at eight in the morning, she was horrified to see the kitchen in disarray and bowls of every shape and size scattered on corridors amid puddles of freezing water. She assumed they had been having a pyjama party or a midnight feast of some sort. It was not until Emily appeared wearing yesterday’s clothes carrying a pale faced little girl across her arms fighting for breath that she realised what had gone on.

Close to exhaustion, Emily cried out, “Cassie, Rita needs to go to hospital, right now!” Around her stood a group of ashen faced girls, some still clutching bowls. “You need to call a doctor because there are lots of sick kids here.”

Without saying a word, Cassie pulled her phone out of the back pocket of her jeans and made a couple of calls.

5 thoughts on “Duty of Care and The Caretakers”