Today it is my pleasure to welcome poet Utanu Maa and her book Rise and Fall of My Beloved.

Rise and Fall of My Beloved is a collection of poetry and prose about resilience—about the experience of stigma and rejection, disease and suffering, love and care, loss and grief—and also a testimony of gratitude, forgiveness and togetherness. Each of its three parts is a journey through life’s struggles, pain and loss, all of which require an inner force to overcome, build, rebuild, succeed and heal: resilience. It expresses an undercurrent to an imposed destiny or stigma.

Based on the life experience of my late brother, Rise and Fall of My Beloved is a tribute to mankind’s resilience to overcome adversities. The book takes readers from his vulnerable childhood as a neglected orphan set to die, through a childhood in which he was bullied, to his rise as an accomplished engineer, and sadly to his fall as a dying patient of HIV/AIDS. Each poem depicts the essence of unconditional love and care, the dignity of dying of AIDS, forgiveness, and family bond. This book is a manifesto of my brother’s exceptional resilience, the best memory of him that will live forever. It is an invitation, an inspiration, a reflection that, when mankind encounters struggles, disease, pain, death, loss, grief, we have to grieve and heal, and rebuild.

I am Utanu MAA. I live in Toronto and work as a public servant within the Ontario Court of Justice. Originally from the Democratic Republic of Congo in Africa, where I studied French Literature and Law before migrating to Canada in 1991, and thereafter studied Fashion Marketing, Paralegal and Law (1year) programs. In 2004, I was a recipient of a prize for the Poetry contest organized by Canada Heritage during the celebration of the Francophonie. “Couleur d’une langue” (The Color of a language), my unpublished poem about the diversity and different accents that give rhythm and power to a language to become an umbrella of one identity. “Rise and Fall of My Beloved” is also my own journey into unconditional love and care, and the resilience to deal with pain, loss, grief, to grieve, heal and continue with life after my brother’s death. 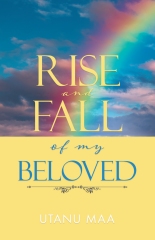 An Excerpt Just for Readers of This Blog

He lacked the speech and was teased, mocked.

They did not believe in his ability to learn and succeed,

They repeatedly told him loudly, in his face

And ears with intent to persuade him about himself.

They predestined him for failure because he was unable to speak.

He remained silent for a long time, listening carefully.

He observed motions on their lips; he absorbed words and sounds.

Then, one early morning, still in bed,

While everyone was in their last dream or nightmare,

And when time had healed and ended his grieving,

The miracle happened: he spoke!

Words and sounds gusted out of his mouth

Like a volcano erupting after a century of long sleep,

He spoke, he spoke, and he spoke volumes!

He talked firmly to himself or maybe to an invisible entity or spirit,

Repeating verbatim words that he had been absorbing:

The same terms used to tease, label, and mock him,

To bully and denigrate him, to silence him and cast him out.

From the bed where I slept, after we were allowed,

I saw him walking outside like a soldier going to war,

Brave and determined to defend his persona with words!

The struggle was out there, and he went to fight it

With his only but most potent weapon: words!

Words used in a common way: verbally, loudly, and firmly.

He knew the power of words, used for any purpose.

Now equally equipped to face the struggle in his early life,

He spoke correctly just as he had observed words on lips,

Using the same words to tease, mock, or intimidate.

To the big disbelief of all, though I had prayed and pleaded

To my ancestors and God that one day he would speak,

Zola had proven at last his ability to pronounce words.

Soon he would go to school to learn words in books,

To write words on a blackboard or in a notebook,

On a wall or on the ground, carving on a tree or on leaves.

Words pronounced in speech to make a statement,

Words spoken with confidence in a native or foreign language,

Words that would further educate and engineer his brain,

Words as a tool to beat all odds and rise exceptionally like a star,

Indeed, words were clearly spoken by his mouth from this point on.

What liberation, relief, blessing, and privilege!

Utanu Maa — we appreciate your sharing one of your poems with us! Best of luck with sales of Rise and Fall of My Beloved, and with all of your future writing.

Today it is my pleasure to welcome author Elizabeth Cooke and her mystery novel, Mimi’s Paris Dilemma.

Mimi’s Paris dilemma overwhelms her. She feels desolate, unappreciated, her celebrity status lost. The Parisiennes, the women of Paris, have turned against her. They are sympathique to the fate of a woman incarcerated for murder and reject Mimi, who was instrumental in bringing about that fate.

In this, Book Two of The Mimi Series, new crimes are committed. Mimi again is instrumental in helping solve them because of her sensitive petit nez, which pursues nasal clues where no human can follow.

Where few are aware of how truly skillful the little dog is, they slowly come to realize her value, and Mimi’s reputation is gradually restored to its full power.

Elizabeth Cooke, born and bred in New York City, graduate of Vassar College and The Sorbonne, is the author of several books about Paris, where she lived in the 1950s. 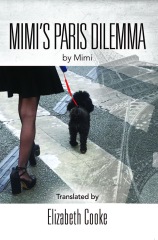 Imagine having a dog as co-anchor on an interview show like the popular TONIGHT!”

“I can’t wait,” Nicole enthused. “But let us start after the fate of Stephan Ledax is decided and the trial done.”

Three weeks went by before Nicole Marcel and Mimi became full-time co-anchors on the TONIGHT TV interview show. They waited to take up their duties until the trial of Stephan Ledax was over.

Nicole testified before the court, as did Rene Couteau, to the attempted rape in the changing room of the studio. The verdict was unanimous: guilty of sexual assault.

During the course of the proceedings, there was testimony from six other women, relating to the pattern of behavior Stephan Ledax evinced over the period of several years –  involving  a variety of predatory acts – some even cruel: abandonment, abortion, lack of child support.

Stephan Ledax was sentenced to eight years behind bars. As he was led away by a policewoman, his face was distorted and wet with tears.

And so it came to pass.

Elizabeth Cooke — we appreciate your sharing some of your book Mimi’s Paris Dilemma with us! Best of luck with sales, and with all of your future writing.

Today it is my pleasure to welcome authors Sverrir Sigurdsson and Veronica Li and Sverrir’s memoir/autobiography, Viking Voyager: An Icelandic Memoir.

This vivacious personal story captures the heart and soul of modern Iceland. Born in Reykjavik on the eve of the Second World War, Sverrir Sigurdsson watched Allied troops invade his country and turn it into a bulwark against Hitler’s advance toward North America. The country’s post-war transformation from an obscure, dirt-poor nation to a prosperous one became every Icelander’s success. Spurred by this favorable wind, Sverrir answered the call of his Viking forefathers, setting off on a voyage that took him around the world.

Sverrir Sigurdsson grew up in Iceland and graduated as an architect from Finland in 1966. He pursued an international career that took him to the Middle East, Africa, Asia, Eastern Europe, and the U.S. His assignments focused on school construction and improving education in developing countries. He has worked for private companies, as well as UNESCO and the World Bank. He is now retired and lives in Northern Virginia with his wife and coauthor, Veronica.

Veronica Li emigrated to the U.S. from Hong Kong as a teenager. She received her Bachelor of Arts in English from the University of California, Berkeley, and her master’s degree in International Affairs from Johns Hopkins University. She has worked as a journalist and for the World Bank, and is currently a writer. Her three previously published titles are: Nightfall in Mogadishu, Journey across the Four Seas: A Chinese Woman’s Search for Home, and Confucius Says: A Novel. Her website is www.veronicali.com.

The authors will be awarding a $50 Amazon/BN gift card to a randomly drawn winner via rafflecopter during the tour.

One memorable incident took place [in 1968] during our drive through Anbar province in Iraq. The place was unheard of when I motored through, but after the U.S. invasion of Iraq in 2003, this Sunni stronghold of Saddam Hussein’s became world renowned for insurgency and suicide bombings. Even during my days, traveling in this neighborhood was dicey. While guessing my way through the desert of Al Anbar, we passed a ghastly sight. It was the charred remains of what looked like a small industrial complex. The scene evoked news articles about an Israeli air raid on an Iraqi nuclear research facility. I knew we shouldn’t be there, but there was no other way out than to keep driving. Soon after, a military patrol pulled up alongside. I stopped the car, and we all got out to show them exactly who we were, a family of dumb, lost foreigners.

A soldier peered into my car. He started shouting angrily in Arabic, his finger jabbing at the camera on the back seat. They hustled us all back into the Peugeot, I in the driver’s seat, Monika next to me, while Steinn shared the back seat with the soldier. I felt something hard poke at my spine. I glanced at the rearview mirror and realized the object was the muzzle of the soldier’s machine pistol. The drive lasted an hour at most, but it seemed like eternity. To prevent an accidental burst from the gun, I took it slow and easy on the desert tracks.

Sverrir Sigurdsson and Veronica Li — we appreciate your sharing Viking Voyager: An Icelandic Memoir with us! Best of luck with sales, and with all of your future writing.