Today it is my pleasure to welcome author Branwen OShea and her YA Sci-fi novel, The Calling.

When Bleu’s little sister shows symptoms of the deadly Sickness, a strange vision directs him to leave humanity’s subterranean haven and seek the cure on Earth’s glacial surface. Joining the expedition team, Bleu expects extreme temperatures, not a surface ruled by ingenious predators.

Rana and her fellow star beings have co-existed with Earth’s top carnivores since the humans disappeared. But when her peers transform into Crowned Ones, the final stage of star being development, she fears remaining Uncrowned like her parents. To prove her worth, she undertakes a dangerous mission—contacting the hostile and nearly extinct humans.

But Rana’s plan backfires, and Bleu’s team retaliates. As war with the more advanced star being civilization looms, both Rana and Bleu separately seek a way to save their people. 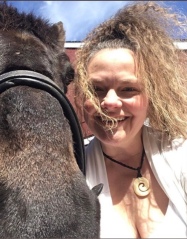 As a young girl, Branwen wanted to become an ambassador for aliens. Since the aliens never hired her, she now writes about them.

Branwen OShea has a Bachelors in Biology from Colgate University, a Bachelors in Psychology, and a Masters in Social Work. She lives in Connecticut with her family and a menagerie of pets, and enjoys hiking, meditating, and star-gazing. Her previously published works include contributing to a nonfiction yoga book, wellness magazines, and her published science fiction novella, Silence of the Song Trees.

When I discovered I’d be featuring a book of OShea’s and would get to ask her any question, I looked up her biography on Amazon, too, and learned that she is a licensed counselor, a yoga teacher, and a sound healer. She says she writes books with stardust and magic. (What a lovely phrase.) So I asked her which of  the many traditions she has studied contributed the most to the “stardust and magic” in The Calling.

Here is her intriguing answer.

I’ve always been fascinated with different belief systems and have read and studied various religious and spiritual traditions since I was about ten years old. For me, every tradition holds great truths, but no tradition by itself fully meshes with my values of compassion, nonviolence, love, truth, and valuing nature. Each of my books explores slightly different beliefs.

The Calling kicks off a series that encompasses three different species, each with their own cultures and beliefs. The humans in my series are mostly scientific thinkers and driven by a sense that the Earth betrayed them by plummeting into an ice age. Most of the humans only trust science. However, Bleu and his family are secretively highly intuitive. I based their experiences on intuitive experiences that I’ve had since childhood. I didn’t give them a specific philosophy, because they had nowhere to research one other than their own shared experiences.

The star being culture and spirituality is possibly a combination of Indian and Yogic philosophy merged with indigenous beliefs and Christian mysticism. I say “probably” because much in this book was told to me in a series of meditations/dreams from the character Rana, a star being. So, you could either assume that my subconscious combined the above, or that it’s a psychic experience and Rana is something else other than a creation of my subconsciousness. The story works either way.

The third species doesn’t appear until the end of the second book, The Chasm, which is coming out in January 2022. Their culture and beliefs could be seen as a combination of shamanism, Islamic beliefs about jinn, and myths of the Fae. That said, their culture, beliefs, and story also came to me in meditations. Like myself, my books contain influences from many cultures and times. The overarching theme of the series challenges humans to reconsider their perceived limitations and separation from other species.

“All right, get out, men.” Savas had never experienced such peace on the last mission. This was truly pleasant. They climbed out of the rover, and he tripped on his own feet as if drunk.

Laughing at himself, he reminded the others, “Guns out. Stamf, take the lead. I’ll bring up the rear.”

He paused, swaying a bit, while the other two men passed him and then proceeded slowly down the left branch. Sparkling light from farther down the tunnel lit their way. With a quick glance back toward the entrance, he took up the rear.

Savas shook his head, blinked, and tapped his ear communicator. Stamf and Abdul, farther ahead, had frozen and appeared confused, swaying in place.

Something was terribly wrong. Was this cave filled with noxious fumes? Had they all gotten cold sickness? The databases talked of arctic workers becoming weak and confused by the extreme temperatures.

Think! Think. Savas wanted to lie down and nap. What’s wrong with me? Images from his childhood tumbled through his head. Not now. Not again. I control my own mind.

They all mindlessly continued forward, as if in a dream. A small part of Savas’ brain screamed in warning. I. Control. My. Own. Mind. He grunted with the effort. Fighting the urge to relax, Savas forced his hands to raise his weapon.

Branwen OShea — we appreciate your sharing your book The Calling with us! Best of luck with sales, and with all of your future writing.

10 thoughts on “The Calling”