Today it is my pleasure to welcome author Susanne M. Dutton and her mystery novel, Sherlock Holmes and the Remaining Improbable

The game is not afoot. The Better-Every-Day world of 1895 is gone, even hard to recall as WWI ends. From his rural cottage, Holmes no longer provokes Scotland Yard’s envy or his landlady’s impatience, but neither is he content with the study of bees. August 1920 finds him filling out entry papers at a nearly defunct psychiatric clinic on the Normandy coast. England’s new Dangerous Drugs Act declares his cocaine use illegal and he aims to quit entirely. Confronted by a question as to his “treatment goal,” Holmes hesitates, aware that his real goal far exceeds the capacity of any clinic. His scribbled response, “no more solutions, but one true resolution,” seems more a vow than a goal to his psychiatrist, Pierre Joubert. The doctor is right. Like a tiny explosion unaccountably shifting a far-reaching landscape, the simple words churn desperate action and interlocking mystery into the lives of Holmes’ friends and enemies both.

Susanne Dutton is the one who hid during high school gym, produced an alternative newspaper and exchanged notes in Tolkien’s Elfish language with her few friends. While earning her B.A. in English, she drove a shabby Ford Falcon with a changing array of homemade bumper strips:  Art for Art’s Sake, Forgive Us Our Trespasses, Free Bosie from the Scorn of History. Later, her interests in myth and depth psychology led to graduate and postgraduate degrees in counseling.

Nowadays, having outlived her mortgage and her professional counseling life, she aims herself at her desk most days; where she tangles with whatever story she can’t get out of her head. Those stories tend to seat readers within pinching distance of her characters, who, like most of us, slide at times from real life to fantasy and back. A man with Alzheimer’s sets out alone for his childhood home. A girl realizes she’s happier throwing away her meals than eating them.  A woman burgles her neighbors in order to stay in the neighborhood.

Born in Des Moines, Iowa, Susanne grew up in the SF Bay Area, has two grown children, and lives with her husband in an old Philadelphia house, built of the stones dug from the ground where it sits. 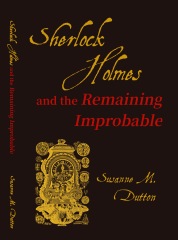 “For God’s sake, then, I must be the one to venture out to him! I know Holmes like no one else. He will not be surprised, or at least not angered, to see me here. He will be relieved. You must trust me on this.”

Joubert’s shook his head. “That was my plan. Just so, mon ami. That is exactly what I believed, and why I sent for you, John. But my speculation did not extend to this.” He gestured toward the windows. The only remaining piece of window glass, a shard big enough to slice off a foot, fell and shattered on the brick floor. I granted myself a sideways glance at Joubert as we both put our chins down and covered our heads again.

An uneasy suspicion took root in my mind, only a seed at first, but an idea that sprouted quickly. If Holmes was angry with this Joubert, then Holmes had reason to be. The detective, as I knew him, was disinclined to speak of his family. It was not impossible that a sister existed or had existed, though I had not seen one in the genealogy upstairs.

Further, how was I to know that the man next to me in the dark was truly the Pierre Joubert of high repute? Even if Holmes had returned to the cocaine, hadn’t I better treat this fellow’s explanations with wariness? Holmes’ addiction had never before affected his ability to adjudge good and evil. Unerringly, Sherlock Holmes recognized the enemy of the just.

Susanne M. Dutton — we appreciate your sharing your book Sherlock Holmes and the Remaining Improbable with us! Best of luck with sales, and with all of your future writing.

8 thoughts on “Sherlock Holmes and the Remaining Improbable”