Today it is my pleasure to welcome Ron B. Wilson and his book Resilience: Stories and Lessons From An Ardent Photographer.

About the Author and the Book

Ron B. Wilson’s impressive 30-year career as a professional traveling photographer has taken him all across the United States and the world, from Cuba and India to South Africa and Morocco. Always with his camera in hand, Ron has captured moments of unforgettable history, including the tragedy of 9/11 and the fallout of the Chernobyl nuclear disaster. The common theme that binds all these stories together has been undefeated resilience. Ron’s journey will inspire readers to live, learn and better understand the everyday struggles of communities across our vast planet. Photographers eager to learn more about their craft will find practical lessons accompanying every story, and non-photographers can appreciate the life lessons that come from the art of capturing the human condition. For lovers of travel, photography, art or humanitarianism, this book is a must-read. 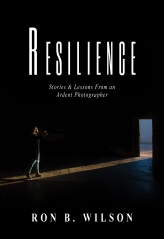 Life comes and goes if we don’t focus on what we really want. But I know what I want—I want to be a donor and an investor in the world. I want to make more deposits than withdrawals. I want my words and actions to carry weight, not to be fleeting and inconsequential.

Travel allows me to establish myself in the world, to make something real, to manifest things. Traveling gives us more stories to tell. And marginalized people have the right to share their stories with the world as much as anyone—maybe even more so. Privileged people like myself can help with that. I believe I was not born in the USA just to sit in my backyard and barbecue chicken on weekends, but to use my advantages, my resources and abilities, to help those who don’t have what I have. These are gifts to help others. Regardless of your passions, you must concentrate on what is important and what is real.

Ron B. Wilson — we appreciate your sharing your book Resilience: Stories and Lessons From An Ardent Photographer with us! Best of luck with sales and with all of your future endeavors.

Today it is my pleasure to welcome H. Downing Lane and his memoir My Rite of Passage During the Summer of ‘76.

MY RITE OF PASSAGE DURING THE SUMMER OF ’76 is a riveting coming-of-age memoir about adventure on the high seas with philosophical musings that add a resonant layer of depth.

In this memoir, H. Downing Lane recalls the 25-day transatlantic sailing trip he took in 1976 as a young man, the details of the journey around Iceland, the Faroe Islands, and other locales, and reflects on its significance as a coming-of-age learning experience.

H. Downing Lane was 26 years old in 1976 when he decided to sign up for a transatlantic sailing trip into the Arctic with an accomplished captain named E. Newbold Smith. In this vivid, often exhilarating memoir, Lane draws from journal entries written during his time at sea to share an account of the remarkable voyage.

The Atlantic crossing was a 25-day affair, from Chesapeake Bay, around Iceland, the Faroe Islands, and the coast of Norway. It was undertaken at a point in Lane’s life when he was feeling particularly vulnerable, as he was recovering from an accident in which he had lost an eye. He wished to “prove [his] mettle,” not to the other men aboard the boat, but to himself. As it turned out, Captain Smith was something of a kindred spirit, as he too had survived a devastating accident many years earlier. Lane provides the reader with a realistic vision of what life aboard a sailing vessel is like, from the often freezing temperatures above and below deck, to the many challenges presented by simple bodily necessities. He describes various technical aspects of working on the boat, but his language never devolves into jargon; his account is always perfectly clear and accessible.

Lane seasons the text with literary and philosophical quotes that frequently allow him to consider the greater meaning of his experience, and even of life itself. There are also numerous stunning photographs included of the boat and the various stops along the way.

Downing Lane is a retired educator, tutoring business owner, English teacher, coach and administrator who sails in his spare time. Presently he is writing a series of books that chronicle his sailing adventures.

Born and raised on the eastern shore of Maryland, he has returned home after 40 years to write. Henry taught sailing for eight years on Long Island Sound and sailed competitively on the Chesapeake Bay, crewed transatlantic to Iceland and Norway, been a crew member of a number of Annapolis – Newport and Newport – Bermuda races and sailed much of the Caribbean and Bahamas.

In 1978, he sailed the SORC around Florida.  In 2008, he purchased Mystique, a 40′ leopard catamaran, and in 2013, he sailed it to Santo Domingo, the Turks and Cacaos and eventually to Florida.

In 2016, he sailed solo for 51 days through the Exumas. On another adventure he and Lainie Wrightson had a calamitous time together – losing both rudders – the basis of his second book, Bluewater Mystique.

He has chartered boats to sail the Dalmatian Coast, Belize, Abacos, Eleuthera and the Maine coast. While maintaining his blog http://www.bluewatermystique.com, he has written numerous blogs about life and sailing.

He is a dedicated learner and loves sharing his experiences and stories.

(I do love exclusive excerpts!)

It was understandable but no one saw it happen. There were no witnesses. After all, the weather conditions during the night barely allowed anyone on deck to observe anything other than pitch black. It had been so dark that even seeing your watch mate was difficult a few feet away. Visibility that night was equivalent to being locked in a dark and dank churning coal bin dungeon.  Even the oncoming huge waves during the turmoil in the midst of the 2nd of 4 gales were difficult to anticipate. While we knew they were coming at us, they did not appear until just before our bow either dipped or sliced into them. They appeared like sea mammoths, like sea leviathans spraying their spume on our deck and tossing us around in the darkness. We were a mere toy in a tub. A teapot in a tempest. Mere moths against monsters. Without stars to light them up, without any depth perspective and with almost constant rain pelting down, the waves appeared more magnified monstrosities than ever. Each night felt surreal outside on deck, as the only visibility we had was a trail of phosphorus tailing us in our white wake. So we had the perfect setting for a mystery.

H. Downing Lane   — we appreciate your sharing My Rite of Passage During the Summer of ‘76 with us! Best of luck with sales, and with all of your future writing.

Today it is my pleasure to welcome author Elizabeth Cooke and her mystery novel, Mimi’s Paris Dilemma.

Mimi’s Paris dilemma overwhelms her. She feels desolate, unappreciated, her celebrity status lost. The Parisiennes, the women of Paris, have turned against her. They are sympathique to the fate of a woman incarcerated for murder and reject Mimi, who was instrumental in bringing about that fate.

In this, Book Two of The Mimi Series, new crimes are committed. Mimi again is instrumental in helping solve them because of her sensitive petit nez, which pursues nasal clues where no human can follow.

Where few are aware of how truly skillful the little dog is, they slowly come to realize her value, and Mimi’s reputation is gradually restored to its full power.

Elizabeth Cooke, born and bred in New York City, graduate of Vassar College and The Sorbonne, is the author of several books about Paris, where she lived in the 1950s.

Imagine having a dog as co-anchor on an interview show like the popular TONIGHT!”

“I can’t wait,” Nicole enthused. “But let us start after the fate of Stephan Ledax is decided and the trial done.”

Three weeks went by before Nicole Marcel and Mimi became full-time co-anchors on the TONIGHT TV interview show. They waited to take up their duties until the trial of Stephan Ledax was over.

Nicole testified before the court, as did Rene Couteau, to the attempted rape in the changing room of the studio. The verdict was unanimous: guilty of sexual assault.

During the course of the proceedings, there was testimony from six other women, relating to the pattern of behavior Stephan Ledax evinced over the period of several years –  involving  a variety of predatory acts – some even cruel: abandonment, abortion, lack of child support.

Stephan Ledax was sentenced to eight years behind bars. As he was led away by a policewoman, his face was distorted and wet with tears.

And so it came to pass.

Elizabeth Cooke — we appreciate your sharing some of your book Mimi’s Paris Dilemma with us! Best of luck with sales, and with all of your future writing.