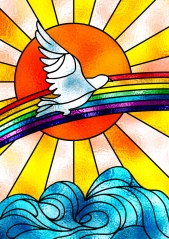 The main character in One of One, Lola Zeitman, is an idealist fascinated with the concept of world peace. She has always believed that the key will somehow involve individuals learning to better understand and empathize with each other.

In keeping with her idealism, the book directs the reader to a variety of websites.

The Geneva Declaration on Armed Violence and Development is a diplomatic initiative working to achieve measurable reductions in the levels of armed violence worldwide.  Learn more about it here.

“The Golden Rule’ is a painting by Norman Rockwell that Lola loves, and receives a print of for her fiftieth birthday. There are many websites featuring this beautiful painting.  View it here. Buy it here. Read the story behind the painting here.

The organization Doctors Without Borders was formed in response to the Biafra conflict and the frustration of French doctors with much of the international community’s insistence on silence regarding the starvation that resulted from the blockade.  Today this non-profit organization sends physicians worldwide with the charge of remaining apolitical but not silent as regards human suffering. Visit the website.  Donate here.  If you paid for a copy of One of One you have already given something, as ten percent of the author’s proceeds are being sent to Doctor’s Without Borders.

World peace  ….  that favorite topic of beauty pageant contestants and those attempting a serious drinking toast ….. was also an obsession of the inventor of dynamite, Alfred Nobel. 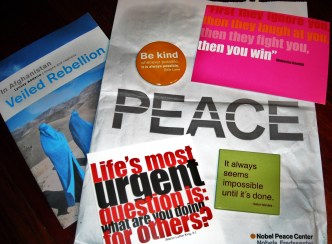 His personal recipe for world peace was to use part of the fortune he amassed from his invention to present an annual award to the human or humans who had done the most in the past year to make peace happen.  Along the way people as diverse as Mother Teresa, Leo Tolstoy and  Henry Kissinger have been honored. The award is presented every year in Oslo Norway, and a few days ago the author of this blog got to visit the Nobel Peace Center in Oslo.

I and the character I created, Lola Zeitman, both share Alfred Nobel’s obsession with the concept of world peace. Lola believes that empathy is the key to getting along, and that if we could all just walk in each others shoes (or feel each others feelings) hatred would be difficult. I like to think that she is right. However, I may be less of an idealist than Lola. Humans are remarkably clever and I fear that even if we all became telepathic tomorrow, we’d still find a way to hate, not to mention figuring out a hundred new ways to manipulate and take advantage of each of other. 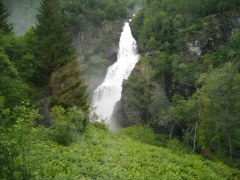 I do now know, however, that Norway is a stunningly beautiful country (see waterfall at right), Oslo is a fascinating city (see statue above) and the two exhibits at the Nobel Peace Center during July 2012 were truly moving. I walked away with a few trinket souvenirs, and the belief that if even the man who invented dynamite can reach out for a solution to war, maybe there really is an answer out there somewhere.

Would you like to add your thoughts? Please do. Cancel reply