I’m a big fan of the TV show “Person of Interest” and last night I watched the long awaited first episode of Season 5. It has turned into a story about two warring supercomputers, one of which is good. Good supercomputer had to be totally rebooted last night and as it became reacquainted with its human helpers, it considered the amount of death and mayhem they had inflicted during the fight for goodness. To no science fiction readers’ surprise, it ended up deeming them every bit as bad as the bad guys.

The supercomputer has a point. When does what you are fighting for become irrelevant due to the amount of carnage and pain you have inflicted? Is the answer really “never”?

Enter an article in my to-be-read file called “The Madness of Modern War” published on the blog Alternet and written last month by William Astore. I stumbled on it this morning and it fed right into my funk about the moral ambiguities of fighting for peace. It begins

Since 9/11, can there be any doubt that the public has become numb to the euphemisms that regularly accompany U.S. troops, drones, and CIA operatives into Washington’s imperial conflicts across the Greater Middle East and Africa? Such euphemisms are meant to take the sting out of America’s wars back home. Many of these words and phrases are already so well known and well worn that no one thinks twice about them anymore. 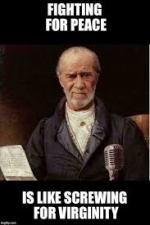 Things do have a way of coming together like this, don’t they? The truth is, life under the watchful eye of good computer would be a whole lot nicer than human life on bad computer’s watch. And life in the freedom loving  U.S.A., for all of its faults, is orders of magnitude better than anyone’s life under the rule of the Islamic State.

So exactly how horribly is one morally entitled to behave in order to achieve an outcome destined to provide more freedom and joy for all?

I fall in the camp that believes there are limits. Something you do remains something you have done, and it stretches your capacity to do the unthinkable. I worry that good guys can become bad guys by imitating them. I think that part of a moral compass includes having lines you will not cross, and directions you will not go.

Let me be clear. I will fight for my own life and my liberty, and thank the others who do it for me. But I will not pay any price to purchase those things, and I like to think that I have the courage to accept that.

You don’t think you agree? If your life, or your freedom, required you to push a button and wipe out every living creature in Australia, would you do it? Would you let someone else do it for you? How about just half of Australia? Just a quarter of it? Okay, exactly how much of Australia are you willing to destroy? How about if we change the country to Somalia? Syria? Sweden?

It’s a messy question, isn’t it? As a species we can identify some actions clearly on one side of the line and others clearly on the other, but it is all that grey area in-between that gets us into so much trouble. How about we begin by at least agreeing that there is a line. That’s a start.

William Astore concluded his article with

If the gray zone offers little help clarifying America’s military dilemmas, what about VUCA? It’s an acronym for volatile, uncertain, complex, and ambiguous, which is meant to describe our post-9/11 world. Of course, there’s nothing like an acronym to take the sting out of any world. But as an historian who has read a lot of history books, let me confess that, to the best of my knowledge, the world has always been, is now, and will always be VUCA.

I’ve watched the news in sorrow. News of deaths, of outpourings of sympathy, of despair that other deaths go relatively unmourned as people of all faiths and backgrounds flee in terror. Mostly they are running from those would kill them if they cannot control them. Sometimes, though, they are fleeing the bombs of those trying to stop the terror. Everyone runs from bombs, no matter what their source. And the hate and the fear and mistrust grows all around. 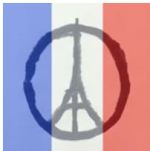 I write a blog about world peace. It’s an odd topic for a blog, but it grew out of the premise that if we all understood each other better, if we listened, if we could feel another’s pain and joy as our own, world peace would be achievable. I know how idealistic this is. But I believe it.

We have to harden our hearts, steel our minds against empathy in order to commit the sorts of atrocities that have filled the news. We have to lie to ourselves deep within to justify behavior that we know is wrong. It is easy to argue and point fingers and incite others to be afraid and angry with us. It takes so much more strength to soften and allow understanding. It is far more difficult to admit that, at our core, we are sisters and brothers. 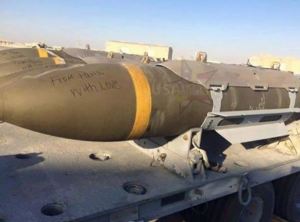 Yet here we are, throwing rocks at each other on this little playground that we call earth. The teachers and other adults appear to have left, and we seem like a bunch of rambunctious children, often dedicating ourselves to finding ways to make each other miserable. It’s time for us to grow up. The playground gets smaller every day. The calls to hate and hurt grow stronger, made more powerful by the technologies we have invented. Our “rocks” and other ways of harming each other have grown exponentially with our cleverness.

Most of us want better. Yes, the few who prefer chaos, or think they have a right to control others lives or end them if they cannot, must be won over to compassion, and they must be isolated and rendered harmless until they are. But as we do that, we must avoid becoming insensitized to the humanity of others, lest we become the very thing that we are trying to stop.

We need to fix this, not make it worse. It’s important. We are talking about our home here. 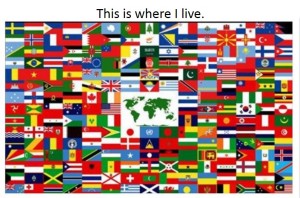