I learned to love Kurt Vonnegut decades ago, based on reading only six of his earliest and most famous works. Much later, I tried to read Breakfast of Champions and couldn’t get through it. I never even tried his later novels. He’d changed. I’d changed. Or maybe, I’d just gotten from him the one message that I most needed to hear.

For all that I loved his cynicism and his humor, this one quote was it. The words have stuck with me through decades of living.

“Hello, babies. Welcome to Earth. It’s hot in the summer and cold in the winter. It’s round and wet and crowded. At the outside, babies, you’ve got about a hundred years here. There’s only one rule that I know of, babies—God damn it, you’ve got to be kind.” — God Bless You, Mr. Rosewater (1965) 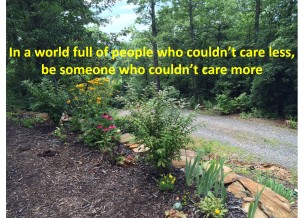 That’s right. All that wit and imagination of his, and this was my main take-away. I wouldn’t blame you if you thought that was disrespectful, although I think Mr. Vonnegut wouldn’t have minded a bit.

I’m attempting to summarize what I do believe in and it’s been an interesting exercise. Am I dying soon? Planing to run for public office? No, neither. I just really liked the movie “Wonder Woman” and it got me thinking.

What do I believe in so strongly that I want it to shape my behavior?

At this point, you might be concerned that too much of my personal philosophy comes from science fiction, but I’ll argue back. Stories of a speculative nature throw out a lot of societal constraints found in other frameworks, making it a fine realm in which to develop one’s code of ethics. It is absolutely where I have developed mine.

And I have the fictional Eliot Rosewater to thank for my most central belief. If I can’t be anything else, I want to be kind.