Today it is my pleasure to welcome author A.R. Kennedy and her cozy mystery novel, R.I.P in Reykjavik.

Traveling with your family can be murder.

One wedding party + one estranged mother = another vacation that goes array for Naomi.

Naomi is off on another international vacation. She thinks traveling with her mother will be the most difficult part of her trip until she meets the rest of the tour group—a wedding party. It only gets worse when she finds the groom dead. Everyone’s a suspect on her Icelandic tour of this stunning country.

In R.I.P in Reykjavik, A.R. Kennedy has taken her idea of combining arm chair travel and cozy crime stories up a notch. This is a witty, fun and easy-to-read amateur sleuth novel that will once again have you turning the pages to cheer on its rookie crime solver. This time around, you’ll be enjoying the beauty and charm of Iceland while you do it. 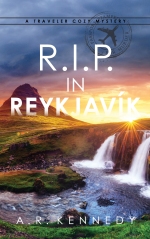 Naomi acts more grown-up in this novel, and her previous amateur sleuthing in Africa has made her more competent at solving murders, too. It makes her a more likable sleuth. As a bonus, the reader gets new details about her dysfunctional family and I think this knowledge makes the whole series more appealing.

One of my favorite things about her writing is the ongoing humor. Enough sly wit was scattered throughout the story to keep me smiling, but I was laughing out loud near the end as Naomi made a video for her sister of the coming and goings in the hotel hallway. It’s worth reading the book just for that scene.

Deep twists and unexpected turns regarding the murder aren’t Kennedy’s MO, but once again we get an adequately complex cast of suspects, and a satisfying ending. I’ll take that any day.

I recommend this book to anyone who likes cozy mysteries, amateur sleuth novels or travel.

Check out my review of the author’s previous book Sleuth on Safari.

The teaser at the end of R.I.P in Reykjavik says Naomi’s next adventure will be in Australia. I’m looking forward to it! 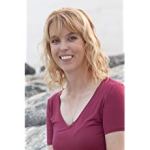 A R Kennedy lives in Long Beach, New York, with her two pups. She works hard to put food on the floor for them. As her favorite T-shirt says, ‘I work so my dog can have a better life’. She’s an avid traveler. But don’t worry. While she’s away, her parents dote on their grand-puppies even more than she does. Her writing is a combination of her love of travel, animals, and the journey we all take to find ourselves.

Buy R.I.P in Reykjavik on Amazon or find it at Books2read.

Yes, there is a giveaway.

A. R. Kennedy will be awarding a $25 Amazon/BN gift certificate to a randomly drawn winner via rafflecopter during the tour.

I’ve haven’t yet had the good fortune to travel to Iceland, but I did get to research it for my novel Flickers of Fortune. My hero Ariel, also a tourist, did many of the same things Naomi did, including visiting the Blue Lagoon and eating at the Lava restaurant. It was extra fun for me to read these scenes!

We stopped for lunch at a local restaurant. As I sat down at one of the long benches, my cell phone rang. Charlotte’s face appeared on the screen. I ran outside to answer it.

“So I heard you had a late night,” Charlotte said.

“Not the time.” I looked over my shoulder to make sure no one had followed me out. “The police think it might not be an accident.”

Charlotte audibly sighed. “Is that why it was a long night? You were with the police?”

“No, one of Ösp’s friends is a police officer.”

“Please don’t encourage Mother. His name is Ösp. I don’t want her nickname to stick.”

“Her nickname? I called him that,” she corrected me. “He looks like Thor.”

I looked over my shoulder at the restaurant’s entrance. “Looks like? How do you know what he looks like? Did you cyberstalk him? Check the hotel’s website for the staff’s pictures?”

“No. Mom texted me pictures.”

Horrified, I asked, “And how did she get them?”

“She followed you to the lobby.”

“Give her a break. She was excited. It was like seeing you on your first date.”

“I’ve been on dates before.” I glanced over my shoulder again for any of the suspects.

“Would you like it if Dad followed you out on a date?”

“I don’t think Dad cares about those things.”

She was probably right.

“Anyway, this police officer I met last night said the autopsy must have shown something because they hadn’t closed the case yet.”

“So you turned your date into a fact-finding mission?”

“It was a happy coincidence.” I thought I heard the door open behind me. I turned to see no one. It must have been the wind.

“Why do you keep looking behind you?” Charlotte asked.

“Just making sure none of the suspects can hear me.”

“Suspects? You’ve turned your traveling companions into suspects?” She paused before adding, “Again?”

I ignored her. “Hurry up, Charlotte. Someone is going to come out looking for me soon.”

I looked at the restaurant door and wished I could run in for my backpack, so I could take notes. “And what would that show?”

“Whatever was in his system. Maybe drugs, poisons.”

“I forgot to ask. If it was poison, how long before he died would he have to be poisoned?”

“Depends on the poison. Probably an hour or two, I guess.”

“Could you get a poison through TSA?”

“In something in a bottle with less than three ounces, sure. Could have been a powder. They could have bought it locally too. Rat poison and antifreeze has been used in a lot human deaths.”

“Can you think of anything specific I should look for?”

“You should look who’s coming up behind you,” she said before hanging up.

I suck at social obligations.

Three Myers Briggs tests have found me to be an off-the-chart introvert, and my abilities as an empath once made me fear I was secretly from Deanna Troi’s home planet. It’s not a great combination. If I have to go somewhere, I soak up everything around me and it leaves me drained.

This doesn’t mean I can’t function around people. I’m practiced at faking normality. (Aren’t we all?) What it does mean is if I have to deal with people for very much or for very long, I can’t write.

The first time I heard the phrase Good Literary Citizen, my heart sank.

You see, I agree with the principals behind the idea, but I’m horribly suited to putting them in practice. Over the years, I’ve found three avenues that work for me, at least in limited quantities. I’ve found corollaries of these that have the capability to be my kryptonite. This post covers one set. (Read the second one. Read the third one.)

I’m from the US. Put me and a handful of other Americans in a room full of Brits and I’ll be the first one to start talking with a slightly British accent and I won’t even notice it. Yes, I have my own voice, but it’s as mutable as everything else about me. If I’m not careful, I write like the last person I read.

Read short things by different people, and read lots of them.

I’ve become a great fan of flash fiction. My genre is speculative, so I subscribe to Daily Science Fiction. Most days they send me a story of 1000 words or less. Some are brilliant. Occasionally one is sort of dumb. Every few days I read several of them at once. This keeps me current on themes and word choices floating around in my chosen genre, without any one author getting too deeply into my head.

Sometimes, DSF lets readers vote for stories they like. I do this to support authors who impress me. I also seek them out elsewhere and follow them or list their works as “want to read.” It’s my way of giving them a quick thumbs up before I move on to my own writing. (I also save their stories to reread and inspire me to write better.)

I avoid long novels by others, and I will not let myself get involved in a series. Not now. Not me. I can read all those great series out there when I retire from writing. I’m looking forward to it.

I also avoid authors with too distinctive of a voice. There’s nothing wrong with them; in fact some of them are great. They just aren’t for me right now. Again, someday …

As a result (1) I’m generally writing, (2) I generally sound like me, whatever that is, (3) I’m not completely out of touch with what is happening in my genre and (4) I’m doing at least something to support other authors.

I think it’s a win-win-not lose situation. Given my constraints, I’ll take it.

I have no doubt that the more time people spend together, and the more they understand each other, the less likely they are to hate or kill each other. I feel so strongly about this that I wrote a book about how truly understanding another person would make it far more difficult to kill them.

Every so often I discover a group acting on similar ideas to make the world a better place, and it fills me with joy. Yesterday I had the privilege of having lunch with members of such a group. 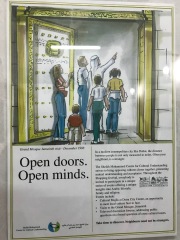 I’m in Dubai, the largest city of the United Arab Emirates. This modern, cosmopolitan city of over two million is a whopping 82% expats. They come from every continent, culture and religion and, in spite of their current location, they bring plenty of biases and misunderstandings with them regarding Muslims in general and the Emirates in particular.

Enter a group called “Open Door, Open Minds.” Their idea is pretty much what you would guess. Come have a meal with us. Let us show you some of how we live while you ask questions. Any questions.

This organization not only performs outreach to Dubai’s many residents born elsewhere, but they also invite tourists coming through Dubai to participate. I was lucky enough to be in a tour group that did so.

The food is plentiful, and the hosts are warm and sincere. They invite you to try on the traditional clothing worn by your gender, and they take you on a tour of an old home.

They also answer whatever awkward questions the group wants to throw at them. Ours was pretty polite, but I got the impression that not all others were.

A map in the hallway shows the many places these tourists have come from. Have there been enough of them to achieve world peace? Of course not. But  ….. it’s a start. 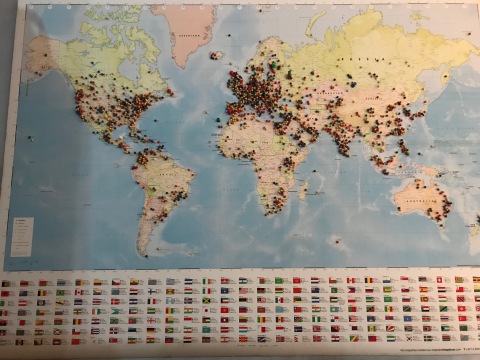