Yesterday was so exhausting that I sleep for nine hours on an air mattress without waking up once, while the soft slow bass of far off electronic music mixes with the wind and dust outside my tent. I wake to a chaos of supplies I dumped randomly, in the hope that I would wake with the energy to sort through it. I do, and, after a cup of coffee, I do.

This day is as dusty as yesterday, with short bursts of almost no visibility. I’m determined to survive in this and I fill the day with getting settled in to my camp and doing a little preliminary exploration. The beach bike I have brought to the playa is perfect, its fat tires riding smooth and sturdy over the desert.

As twilight comes, the winds stop, and the world takes on a carnival glow. Color is everywhere, blinking and twinkling in the most unexpected of shapes. My camp mates invite me out for a bike ride on the deep playa, that place away from the campers where art cars roam and art installations glitter, waiting to be admired.

Today’s rule of the road? Don’t let a day determine for you how the evening will go. I shrug off my dusty scarf and join them.

Our first stop is at the DMV, Department of Mutant Vehicles, where many of the art cars are lined up waiting to get their permits to roam. Yes, even at Burning Man one stands in line to get a permit.

We pause to take in their beauty, then we head out, each stopping to admire whatever shiny

thing takes our fancy. Groups seldom stay together out here, as I learn, but often find themselves magically reuniting.

Magic is the word of the night for me. The world around me has turned from a dust bowl into a dream of a fantasy tale set in a science fiction world created by a magician. It goes on as far as my eyes can see, with a depth and scale no screen could capture.

I stop my bike and just stare, somewhere between amazement and disbelief.

Many camps near the edge of the open playa offer drinks or dancing. One has set up a roller rink.

Music of all kinds plays around me. I am surprised by the number of classic rock tunes I recognize as they mix with the ever present dance music. I hear this particular old favorite at least twice, and deem it the song of the day.

Posted by Sherrie Cronin on September 5, 2018 in travel

Excuse the childlike excitement here, but c3 has achieved a milestone for me and I’m having trouble sitting still long enough to type about it. I’m just finishing my first Kindle Select giveaway for my new book, and it has managed to hit number one in its subcategory of metaphysical fiction. It even made it well into the top 100 for all genre fiction (beating out a LOT of erotica) and as high as 58 for all science fiction and fantasy.

I am truly excited about this new book which I believe manages to expand my overall story of a family with subtle, believable superpowers while still offering a unique and exciting plot. It also furthers my tale of how these heroes work together to make a better world.

As of midnight tonight, c3 is no longer free on Amazon, but it’s incredibly cheap, with a lot of thrills for just $2.99. You can pick it up here.

Posted by Sherrie Cronin on February 16, 2014 in writing

My 4th novel is out on Kindle today! Please check out Teddie’s story here at Amazon and share it with others if you enjoy it.

Teddie’s life as a sixteen year old hasn’t always been easy, but nothing has prepared her for the unexpected dangers she encounters as an exchange student in Darjeeling. A frightening world in which young girls are bartered and sold stretches its icy fingers into the beautiful resort town and touches her friends one by one.

Terrified, Teddie finds that her own mind develops a unique ability for locating her friends and that an ancient group of mind travelers is willing to train her to use her new skill to save these girls. It will require trust in ideas she barely believes, and more courage than has ever been expected of her. When it becomes clear that the alternative is her friends’ deaths and the unchecked growth of an evil crime lord’s empire, Teddie accepts the challenge and shows those guilty of unspeakable crimes just how powerful a young woman can be.

c3 is part of 46. Ascending, my collection of loosely interrelated novels about five very different family members who each discover that they can do the extraordinary when circumstances require it. I have designed these books to be read as stand alone stories or in any order.

If you enjoy c3, consider z2, the tale of Teddie’s father as he learns to use his ability to warp time to protect Teddie and her friends against a threat from a white supremacy movement at Teddie’s high school, available here. You may also enjoy y1, the story of Teddie’s brother Zane as he develops an odd ability to alter his appearance. You can get it here. Of course please check out x0, the subject of this blog and the story of Teddie’s telepathic mother as she finds herself the unlikely hero in a rescue mission in Nigeria.

c3 is out on on Kindle starting today (January 31, 2014). It will be available in paperback and in other electronic bookstores early this summer.

Also, check out my new blog for c3 here. Not only will I feature fun tidbits about the book and information about giveaways, but I will also be blogging about the struggles faced by real life young women the world over, and be telling stories of the true heroes amongst them.

Posted by Sherrie Cronin on February 1, 2014 in my other novels, writing

Would you like to visit “The Palace of Eternity?”

Many of us share a fascination for books that cross genre lines, and I thought long and hard about whether to label my own magical realism collection as science fiction or as fantasy, knowing that each genre’s followers have fairly specific expectations.

This is why new indie writer Andre Jones has my staunch admiration.  He has written a three novel series that flies in the face of genre classifications, with multiple story lines firmly rooted in both science fiction and fantasy. Check out the information below on both Andre and on his first novel “The Palace of Eternity” and for a brief interview with this author.

You’d think riding wyverns, and being in the company of a shape-changer and an armoured telepath, you’d be safe enough. Prophecy, however, always turns one reality into another.

Shak’aran is a far away world full of exotic beings intrigue and magic. So how did humans get there?  Leonie is a feline thief, down on her luck and fighting for survival in the uncaring city of Delta. Various cults are after her, as is the Jart’lekk, the local assassins guild. And this is a good day.  In her travels to assist Fieron, her shape-changer companion, Leonie learns more about herself and her past. She also gains many enemies … even the dead ones still come after her. But, regardless of her prowess, her uncanny abilities (and being able to ride wyverns) magic is the cause of her undoing … on this world, at least. 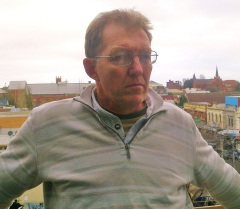 Andre Jones was born and bred on the east coast of Australia. He had a varied childhood (mostly involving something to do with the beach) and developed an early interest in drawing and reading.

A friend introduced him to role playing games – and NOT those of the computer variety – real ones. As most gamers had no doubt realised at some point, a new gaming system could be designed with better rules (and omitting all those ‘nuisance’ rules). Andre developed such a system, then decided it needed its own world to test it. Joining the Navy put a dampener on the this scheme, so all the details were to be included in a book … or so he thought. Also being an avid scifi reader, it was only natural to include aspects of scifi.

‘In the Fullness of Time’ is a trilogy involving fantasy and futuristic Earth. Palace of Eternity is book one, Shadow of the Tower is book two and Depths of Time (working title) is the third and final book.

When pushed, he can’t decide who, if any, writer influenced him the most, but the names of Isaac Asimov, Robert Heinlein and Harry Harrison adorn his bookshelves along with Katherine Kerr, Stephen Donaldson and Robin Hobb, just to name a few. He now lives in Victoria, Australia, and shares his life with his Scottish wife, daughter and two manic British Shorthair cats. When not writing, he still gets involved with Navy activities, permaculture and designing his straw bale home on his soon-to-be self-sufficient farm.

Sherrie: Have you found it difficult to blend the two different genres of fantasy and science fiction?

Andre: Maybe because I love Science Fiction and Fantasy so much, to me there was no border and therefore no difficulty. I know that may sound crazy to some – magic is fantasy and has no correlation with real science (so how can they be regarded as ‘the same’?) – but through my novels (more specifically in Shadow of the Tower) I tried this analogy: there are natural forces in the universe that, when harnessed correctly – can give you a desired outcome (ie harnessing electricity to give you light). A science-based civilisation uses technology to do this – making wires, filament, bulbs etc. In a low-tech world, ‘magic’ is prominent, they’ve learnt to utilise esoteric means to convert the natural forces to get a desired outcome. But you have to believe 100% that it will work (as well as knowledge and training). A scientist and a sourcer are one and the same – they just used different tools.So, other than the method of hanessing the forces – the results are the same. Its simply that attitude/belief-system of the user that determines what method to use. Spoiler alert – based on that premise, you just might find magic going head-to-head with hi-tech weapons and gadgetry on a futuristic earth … and winning.

Sherrie: What is the thing that  you like best so far about your three novel series?
Andre: A couple of things come to mind: I may be wrong (there could be bias ;), but I feel that there’s a slightly different aspect of the magic and hi-tech blend, the theory behind it and the way it manifests in the ‘real’ world. Also, timetravel is a concept that I find extremely intriguing and the various paradoxes that it can cause. You can’t travel through time without travelling through space. I remove the need to have massive engines for FTL travel or ‘hyperspace’.
Note that Andre will be publishing his series online soon and I will run information here on where one can purchase his book.  In the meantime, you can check out the first twenty chapters at Worthy of Publishing .

Posted by Sherrie Cronin on August 20, 2012 in other authors

Free books at Once Upon a Time

Check out Once Upon a Time, an eclectic book blog devoted to fantasy and speculative fiction. It’s a fascinating place to get new reading ideas and today they are featuring x0 with a giveaway of two free electronic copies.

Posted by Sherrie Cronin on June 29, 2012 in One of One elsewhere

Tags: books, fantasy, free, One of One