It turns out I really enjoy book covers. I like looking at them, I like thinking about them, and I love working with professional designers to make them.

I’ve had such fun as these six covers for my re-released collection-in-progress were created, that I hate to see the cover design part come to a conclusion. Aren’t they lovely?

What I’ve enjoyed most is seeing my main characters come to life.

When I first wrote One of One (called x0 at the time) I was obsessed with giving form to my mental picture of Lola, the main character. I wished I could draw well enough to show the world how she looked. I can’t, so I scoured Shutterstock for artists images that captured what I was seeing in my mind. These were some of my favorites.

When I decided to rename the books, I needed new covers. Current fashion is to show the characters, so it looked like I had to find someone who could show the world what Lola really looked like, and would do it at a price I could afford. I found a group called Deranged Doctor Design.

For each cover, DDD found Shutterstock models whose faces were “close enough” to my main characters, and then the faces were altered (if necessary) to make them more accurate. Then the head was stitched onto a body that worked well with the cover design and character. (This process, I presume, yielded the name of the company. I mean what kind of deranged doctor stitches heads onto new bodies?)

The first head DDD proposed for Lola wasn’t right.  She looked too young, but it was more than that. It just wasn’t Lola. I could tell.

The second head looked right as soon as I saw it. What I didn’t know was that the model was blonde, and a creative designer at DDD had already turned her yellow tresses just slightly darker, into a more coppery brown. 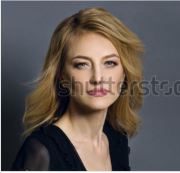 The only change I requested was to make her blue eyes brown, which the designer did with no problem.

When it came time to create the last cover, we needed Lola to make a second appearance, but not with an identical face. Unfortunately this particular model didn’t have many options to choose from.

Third from the right had been used. I liked the second one, but it lacked all trace of superhero steel. The first one had an interesting wistful tone, but not really right either. That left #4.

The first version of the cover came back with Lola looking like this. That’s right, the model is blond but the character isn’t.

I was good with her expression, but her blonde hair and blue eyes had to go.

Here she is with her darker hair and yes she looks more like Lola. Eyes will be brown in the final version coming on Monday.

It’s funny how she is close to what I saw in my head all along. It’s even funnier that now when I picture Lola, this unnamed model with her altered hair and eyes is the image I have. I guess this is what she really looks like.

I had a spirited discussion about this once with a psychologist. I was praising the wisdom of the Rolling Stones; she was sharing her professional observations. We were at a party and it was lucky no nearby cynic entered the conversation arguing people don’t get either.

It is a conundrum, though, isn’t it. You ask for something you think you want, only to discover….

So, a couple of days ago I got this cover proposal for book 5 in my 46. Ascending collection. I loved it, as did others who saw it. This is Ariel, my precog, and Cillian, the Irish prophet who sees the probable end of the human race. They aren’t romantically involved and in fact their powers make even casual touch between them painful.

I asked the designer to put some space in between them, and while she was at it could she please make the ocean behind them more obvious. I like the ocean. It plays a role in the book. I wanted more ocean.

Back came this lovely cover. They aren’t touching, which is good. There is more ocean, but it came at the expense of those gorgeous rocks and thunderclouds and blue lights off to the left. Oh no. Those were the things I liked most about the first cover. I didn’t realize I’d have to lose them to get a little more sea.

That’s the way it works, isn’t it? You can get what you want, but you probably have to give up something else and it may be something you want more. Or something you need. Back to the old expression. Watch what you ask for.

Some times things do go well. Or at least, they don’t go awful. It’s so easy not to notice when that happens.

I’ve been holding my breath for months now (metaphorically) as I worked to release my first novel with a new title. I could hardly be blamed. The first title had an exponent in it. (Yes, as in the letter x raised to the power of zero.) If you’re not mathematically inclined, trust me it was clever, but no one could fault me for wanting a title that was easier to pronounce, market and search for.

However, this meant I had to get a new cover with the new title on it, and resubmit this all to Amazon, and I wasn’t sure what would happen, in spite of a helpful SFWA mentor who’d assured me this could be done. To complicate matters more, the book got a couple of edits to clean it up while the new cover was designed (why not) and much to my surprise it tells the same story in pretty much the same words and yet is about 20,000 words shorter. Amazing. No original reader would ever miss what was cut. Even I had trouble finding it.

So what happened when I republished? Here’s my process and how it went.

I had taken all versions of the book off the market in December. I went back into KDP, and gave my old kindle version the new title, cover, manuscript, and the new variation of my name I’ve decided to go with. (I’ll be publishing under S.R. Cronin instead of Sherrie Cronin. More marketing.) I gave it the new price. I hit the publish button. No sirens went off. So far so good.

Then it asked if I wanted to publish in paperback. Oh yes, I did. Back when I started this adventure, paperbacks were done through Create Space, but that’s changed. I have to say this is easier. I created my new paperback with its new ISBN number and hit publish.

My dashboard showed the two books as linked and under review. I went off and had a glass of wine.

A day or two later both were approved. Wahoo. Then I went into Amazon to find them. It took the full title of my book and my name to get there because Amazon wasn’t used to finding this. That’s okay. Under books, there was my paperback, with no kindle version and no reviews. Hmm. Under Kindle, there was my kindle version, linked to my previous x0 paperbacks being resold by who knows who and with all of my reviews. (27 of them.)

Be patient, I told myself.  It takes a while for these things to shake out.

Almost two weeks later, nothing had changed, so I did something radical. I called Amazon. (Yes, you really can call them. More accurately, you can request they call you.) I got an immediate call from someone with a heavy accent and a helpful attitude. I explained my problem. She laughed aloud at the idea of a book with an exponent in the title and assured me she could fix things. And she did.

Minutes later, One of One in kindle showed up right along with One of One in paperback. Excellent. Then I looked closer. This new combo had 17 reviews. Odd.

I went to the old paperbacks of x0 that somebody out there wants to sell. (I understand there is nothing I can do about this. Amazon will let anyone sell any book.) My old x0 paperbacks had 11 reviews. Hmmmm.

I looked closer. It appears that reviews are attached to either the kindle copy or the paperback. When the two versions are linked, all reviews appear. Once the nice lady on the phone severed my kindle version from the old paperbacks, the reviews got split. As fate would have it, my less favorable reviews were attached to the old paperbacks, including my one and only one star review which still makes me cringe. (She won a free copy! For heaven’s sake don’t read it if you don’t like it….)

So now, I not only have a beautiful new book with a new cover and a new name, I also have a 3/10’s of a star better rating (4.3 instead of 4.0). Those of you who are mathematically inclined could have noticed that 11 plus 17 is 28, not 27. You are correct. I gained a review because the new book already has a brand new review of it’s own — 5 stars from a happy reader. Wahoo again.

Like I said, somethings things go well, even when you don’t expect them too. It’s good to take a moment and appreciate the good fortune.