Everyone in the neighborhood has a hover car but you and maybe one other person. Feeling bad? No one in the neighborhood has a car of any kind but you and this real rich guy up the hill. Feeling good? You get the idea.I recently read a short story that intimated that fairly tale princesses were far less well off than today’s teenagers. I’m going to go out on a limb and say that princesses were happier though, because they were special. Then again maybe not. We are talking about about teenagers here.

At any rate, a while back I hit a difficult time in my career and I was feeling pretty sorry for myself. I’d made my way into some management positions early on and the perks were pretty nice. I had a corner office and I do like my windows. Nice wood furniture and big plants can make you feel pretty important, especially when yours is little nicer than everyone else’s on the floor.

Things changed. My company was bought out and as my career morphed with new circumstances, I returned to technical work and a single window, cheaper office furniture and a small plant. Still not bad.Things kept changing. I had choices to make and went with consulting as I liked the freedom. But consultants usually get put in cubes. My little cubicle wasn’t bad. I could see out of a window down the hall. But when a new contract put me in the tiniest cube yet in the darkest corner of a windowless room, something in me screamed. This isn’t fair. I work hard. The situation wasn’t helped by the many beautifully furnished window offices sitting empty, being held for “real” employees soon to be hired. 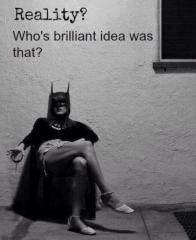 Okay, I thought, time to get a grip. So I started to do what I do best. I began to make things up.

I was being held in a minimum security prison. I’m not sure what crime I committed, but it was something non-violent and even kind of noble. Maybe I refused to give up the name of a source and was being held for contempt. Yeah, that was good. My sentence included being kept in this little dark cube all day, where I was required to contribute by working on some inane thing I could care less about. (Not every piece of this fantasy was total fiction.) But lucky, lucky me. Due to prison overcrowding and my general good behavior, I was released every night to go directly home, where I could see my husband, eat a good home-cooked meal, watch TV shows of my choice and sleep in my own bed. The requirement (enforced by some sort of ankle-bracelet arrangement I was a little vague about) was that I had to return at the same time the next morning and continue to serve my sentence.

Not a bad deal when you think about it. I had creature comforts at the end of every day and all the sky I wanted to see from 6 p.m. to 8 a.m. and most of the other women here weren’t half as lucky. I started to feel bad for them, and feel pretty good about my own situation at the same time.

The fantasy was helped along by the fact that my real-life contract was for 10 months, after which I knew I would be moving on. I exed off the days on my calendar like any prisoner would, and did my best to savor and appreciate the wonderful privileges I had been granted while I served. When the real-life contracted ended, I said something to my husband about being so excited to finally get out of jail.

“It was that bad?” He looked shocked.

“No, not really.” I squeezed his hand. “They treated me okay and let me come home every night to you and it could have been so much worse.”

Yeah, well, we all find a way to get by. Some methods leave us feeling happier than others.

(Read more at “My Imaginary Time in Witness Protection“.)