Today it is my pleasure to welcome author Matt Watters and his science fiction novel Dream Phaze.

All Saxon Zynn wanted to do was dream, not for himself, but for everyone. Back in 2037, Saxon stated, ‘Dreaming is a reality to be experienced.’ A decade of research later and his Dream Immersion technology is poised to become the major entertainment medium of the 21st century, but will unforeseen obstacles prevent him from achieving his purpose?

Dream Phaze is about the inception of engineered dreams and the evolution of indulgence. Set at the crossroads of alternative realities in the near future, it plunges into a world where every human desire, no matter how heroic or evil, can be fulfilled… dreaming just became an adventure.

Matt lives in Sydney, Australia and works as a course developer and writer in the Community Services sector.

‘This narrative began as a short story in 2014. Over subsequent years it evolved through several plot, character and title iterations until Dream Phaze emerged as an episodic series published online in 2018. These episodes, collectively known as Germination, are now an ebook.

Dream Phaze – Imagination, the second ebook in the series, will be released in September 2020.

Matt is a member of the Australian Society of Authors and Alliance of Independent Authors.

Yes, there is a giveaway.

Matt Watters will be awarding a $20 Amazon or B/N gift card to a randomly drawn winner via rafflecopter during the tour.

‘Is that achievable, Saxon?’ Walt asked. 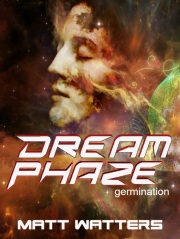 Saxon sat silent for what seemed like minutes. Everyone waited for his response. Responsibility sat heavily upon his face as he wiped sweat from his top lip. His decision would either propel the project at breakneck speed or keep it on the existing timeline. ‘We still have months of testing but…possibly. We’ll have to cut a few corners, increase content production, but we’ll have the bare bones ready for a limited soft launch.’

‘You may not want to hear this, darling, but there are benefits from this unexpected situation. The media gaze has shifted away from Tremaine Group issues and focused on ZynnComm. We can feed this media storm and whip it up into a hurricane of public anticipation. The speculation on social media is nothing short of phenomenal. ZynnComm is trending worldwide; we can’t buy this sort of publicity,’ Margo added.

‘Okay,’ Walt sighed. ‘Then it’s agreed. I know this isn’t how you wanted the project to play out, Saxon, but I agree with Alfred and Margo, we need to move quickly on this and bring the release forward. Alfred, ramp up all unit production, and Margo, instruct PR to organise a few controlled leaks through the usual channels. We need to capitalise on this.’ He turned back to Alfred. ‘Tell Chen from security I want his report on yesterday’s meeting by tomorrow.’

‘Saxon, you need to light a fire under your content teams.’

‘Have you decided on the name for our retail distribution division?’ Walt asked.

‘That was my choice too,’ Walt concurred. ‘The two of you need to stay put for the next week or so while marketing leaks the imminent product launch,’ he suggested to Saxon and Margo. ‘Ah, and Margo, we’re going with Gerber Global Advertising as our exclusive partner for product placement in experiences. Your negotiating and recommendation was spot on, thank you.’

‘GGA will be very lucrative for ZynnComm,’ Margo assured them.